All is not well at the Leaf Village, there are so many problems facing by the Hokage Tsunade. One of them is Danzo. Worried that Danzo may plan another plot, Tsunade orders that Danzo be monitored frequently. Meanwhile, Danzo is still concern about Saiâ€™s decision to stay with team Kakashi a while longer.

Back to the Fire Temple mission, team Kakashi, Chiruku and Sora manage to find the coffins. The funny thing is that the coffins are moving on their own. Besides that, it seems too easy for them to find it that Yamato thinks that it may be a trap. Nevertheless, they still go after the coffins. Naruto and Sora keep competing with each other to recapture the coffin but because of it, they lose it. 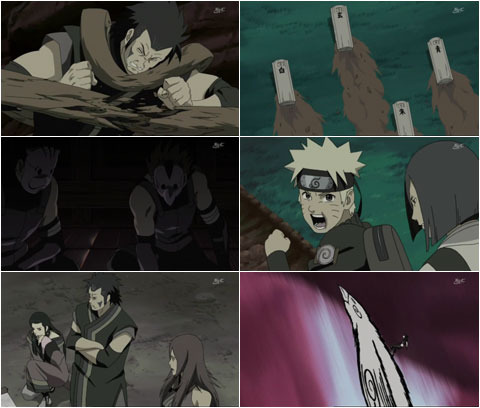 In this episode, we are introduced with 3 more new villains. They seem to be earth elemental users because of their spells are earth based. Fuudo, Fuen and Fuuka are their names. Apparently the only male member in the team is being â€˜queen controlledâ€™ by his female counterparts. These three villains, with their earth jutsu, reconstruct a whole new landscape or maze for our heroes. Will they come out alive as team Kakashi members are separated. 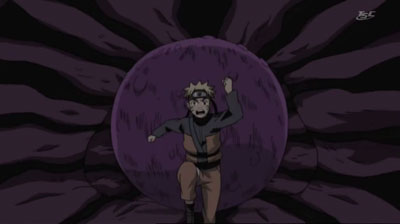