Posted by Neko Kyou in Reviews on September 15th, 2007

Originally I had intended to squeeze all 13 episodes review into a single post, but I wasn’t happy with how it turned out when I was about halfway done. So I’ve re-done them to be more in-depth, but because of that the length also increased a lot. Therefore, the reviews will be split into 4 separate posts; it will become a series article instead. 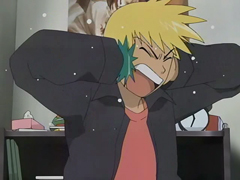 The episode starts off showing a girl, Midori, looking across the train station platform, or more particularly, at Seiji. The next scene shows Seiji in his delinquent mode, taking out an entire gang all by himself with his “Devil’s Right Hand”. It was then revealed that Seiji never has any luck with girls, having been dumped at least 20 times. As he was being frustrated in his room for not having a girlfriend, a girl suddenly appeared on his right hand.

Midori then introduces herself as someone who has had a crush on Seiji for the last 3 years. But neither could come up with how Midori ended up as Seiji’s right hand. Seiji brought Midori to her place and was shocked at her huge mansion. Seiji rang the bell, pretending to be a friend of Midori but was quickly turned away by the maid, saying that the young mistress had left on urgent business.

Two girls approached Miyahara claiming to be Seiji’s fans. Miyahara called and told Seiji about the two girls, and Seiji immediately rushed home. Excited, he quickly wrapped Midori in bandage and told her to keep quiet.

Seiji thought he had it made and invited the two girls in when they arrived, without Miyahara. One of the girls asked to be excused to go to the washroom, and while the other girl distracted Seiji, the first girl tried to attack him from behind. Midori saw this and jumped out to block the attack, smashing the wooden sword in the process. Reality hit Seiji as he frantically tries to remove the bandage to see if Midori was ok, totally ignoring the two girls, who were actually the girlfriends of the gang that Seiji beat up earlier.

Seiji picked up a knife, looking all scary, and scared the girls away. Seiji used the knife to remove the bandage and was glad that Midori was alright, telling her to speak up the next time something happens instead of keeping quiet. 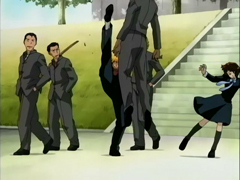 Midori wakes up early next morning and decided to make breakfast for Seiji while he’s still sleeping, completely forgetting that she’s attached to Seiji and drags him around the house. Midori seems to be pretty accustomed to being Seiji’s right hand as she helps him put on his right shoe.

As Seiji makes his way to school, Midori pops out with a brand new dress that reads “I love Seiji” out of thin air. Seriously, where does she have the space to hide all these.

At school, a rumor had spread that Seiji injured his Devil’s Right Hand when he punched through an incoming Yakuza car. Seiji screamed at Miyahara for spreading such rumors which led to a minor confrontation between a Seiji and Ayase.

During recess, a group of delinquents from another school came trying to pick a fight with Seiji. Since he is unable to use his right hand, Seiji decides to avoid the delinquents. Ayase stepped up against the delinquents thinking she could handle them like how she handled Seiji earlier, but was dragged away by the delinquents instead. They were just about to reach the school gates when Seiji came to Ayase’s rescue.

After school, Seiji had planned to try going to Midori’s house again, but instead found himself heading off to save Miyahara who was kidnapped by a bunch of delinquents. Ayase saw what Seiji was up and decided to chase up to give him a piece of her mind about fighting. Seiji arrived at the designated place, but did not fight back as the gang bashed him up, eventually boring them away. When Miyahara asked why he didn’t fight back, Seiji replied that its so that the delinquents would no longer go to their school and bother anyone. Ayase overheard this and was touched.

Seiji and Midori ended going to Midori’s mansion after school the next day. The maid was about to turn Seiji away again but Midori’s mother recognized Seiji from the many pictures Midori kept in her music box and invited him in. Turns out Midori’s real body was in a coma.

Seiji suggested that Midori try and make contact with her real body and see if she would return to normal, but when he pulled back the blanket they both realized that Midori’s real body wasn’t wearing any clothes. Embarrassed, Seiji closed his eyes and stretch his right arm out so Midori is range of her body. As Midori bumps into her boobs, her mother and maid returned and saw what appears to be Seiji taking advantage of a comatose Midori. It was really funny watching an army of maids chasing after Seiji.

Episode 3: The Day of Discoveries 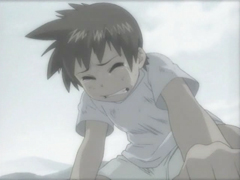 Seiji received his allowance and was counting his money very happily when Midori realized something was burning in the kitchen and pulled Seiji away. And guess who appeared while Seiji was having breakfast… his older sister, Rin. She’s a true horror alright, she managed to sniff out a woman.

Seiji asked what she was doing there and she quickly responded by grabbing the envelope full of Seiji’s allowance. Seiji tried to get it back but was easily pinned down by Rin. She pulled back Seiji’s right hand to mock him about his Devil’s Right Hand, but turned all white when Midori greeted her. Seiji quickly grabbed the envelope which slipped from Rin’s hand and declared his first win against his sister.

Despite saying that it’s unbelievable, she quickly accepted the fact that Midori had become Seiji’s right hand. If Rin could easily take on Seiji who can take out an entire gang, I’m seriously afraid to think of her true strength… Rin locked Seiji in another wrestling move and Seiji would have probably died if they didn’t get interrupted by Rin’s old gang.

Rin then declared that Seiji would be treating everyone to the hot springs and before Seiji could object, she landed a kick flat on his face, which effectively KO’ed him. Seiji woke up sitting behind one of Rin’s gang member’s bike on their way to the hot springs. After seeing how happy Midori was with the trip, Seiji decided that it wasn’t such a bad thing after all.

During dinner at the hot springs, Rin and her gang went crazy on the alcohol while Seiji struggles to eat using chopsticks with his left hand, all the while hoping that the night would end without any incidents. Unfortunately for him, the gang members started performing, but it wasn’t satisfactory enough for a drunken Rin. That’s when all hell broke loose as she revealed Midori to everyone.

Everyone thought Midori was a doll and began poking and touching her. Midori tried her best to endure the situation, but Seiji snapped and the entire gang started fighting amongst themselves as Rin snores away.

Early next morning while Seiji was washing himself in the bath, Midori volunteered to help him wash his back. As she did so, the sponge fell from her hands and she used the towel wrapped around her body as the sponge instead (the lucky bastard!).

Rin showed up much to Seiji’s surprised. They happened to be at a mixed bath so both males and females share the use of the hot springs. Midori asked Rin about Seiji when he was a child, and she revealed that he used to be a pacifist, always avoiding fights and conflicts. It was then that Rin trained Seiji to be a fighter even to the point of hypnotizing him to make him believe that he was the man with the Devil’s Right Hand. She seemed rather good at what she does, it only took a week to completely transform Seiji. Although he lost his first fight, he was never bullied ever again.

Midori was extremely happy that she had learned more about her beloved Seiji, although the same can’t be said for Seiji himself. 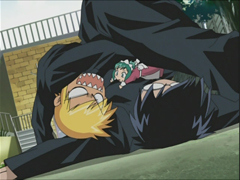 Seiji and Midori was eating banana-chocolate ice cream when the ice-cream fell on Midori and dirtied her clothes. Seiji brought Midori to find new clothes at a dolls shop. It was like heaven for Midori, with all the cute dolls clothes but it was hell for Seiji with all the guys in the shop. Afraid that he might meet someone he knows, he ushered Midori to be quick, but Midori was more interested in playing around and trying out the many different costumes in the shop.

A voice called out Seiji’s name from behind and when he turned around he saw someone who was a complete stranger to him. His nightmare came true when the stranger introduces himself as Takamizawa, who is actually Seiji’s classmate.

Midori continued enjoying herself behind Seiji. When Seiji told Midori to stop it and keep quiet, a curious Takamizawa crept closer and closer, urging Seiji to show him what it is he was hiding. Seiji panicked when he recalled the many bad scenarios he thought up just a few moments earlier and knocked Takamizawa out cold.

The next day in school, Takamizawa slipped a note to Seiji, telling him to meet at the roof during lunch to talk about his right hand. Seiji was certain that he knew about Midori’s secret and was ready to take Takamizawa out on the roof, but it turns out that he just wanted to see the “doll” on his right hand.

Midori agreed and they tried to fool Takamizawa by having Midori pretending to be a doll. And Midori sneezed, sending Takamizawa into a frenzy. Luckily for the duo, Takamizawa believes that it is part of the gimmicks of a foreign made doll and immediately asked for its maker. Seiji refused to answer and took off, leaving Takamizawa on the roof.

That didn’t hamper Takamizawa’s spirit though, and he came up with different tricks to find out and stalked Seiji wherever he went. When Seiji realized they were being followed, he quickly took a corner. Midori insisted on taking a peek beside the corner and came face to face with Takamizawa. It wasn’t long before Takamizawa realized there wasn’t any seams on the Midori puppet and blackmailed Seiji to do as he says.

Takamizawa got Seiji to meet up with him after school the following day. He brought custom made outfits for Midori and has her wear them as he took pictures of her among some flowers. Takamizawa tried to convince Midori to become his right hand instead, but she said that it was impossible, and that she already loves Seiji. However, she still considers Takamizawa as her friend.

Then Takamizawa took out some embarrassing and revealing costumes for Midori to wear, scaring her away. Takamizawa continued to approach Midori and Seiji, who could no longer take it, gave Takamizawa a backdrop, which apparently gave him amnesia and he no longer remembered anything about Midori.