Posted by Neko Kyou in Weekly Review on September 9th, 2007

I watched the entire Midori no Hibi series earlier this week but the reviews for individual episodes will be separate instead of being in this weekly review. (Update: Midori no Hibi episodes reviews are out.) 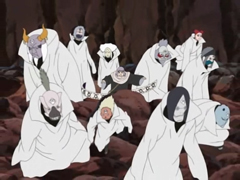 Naruto Shippuuden is finally picking up some speed as we reach the climax of the battle against Sasori – the final showdown between Chiyo-baa’s 10 puppets and Sasori’s 100. I had originally predicted that this part would only appear after episode 30 at the rate the story was moving at the start of the battle but I was relieved to find out that my prediction was wrong. Sakura, Chiyo-baa and Sasori threw out everything they had and just when Sakura and Chiyo-baa thought they had won, Sasori re-appeared and took them by surprise. 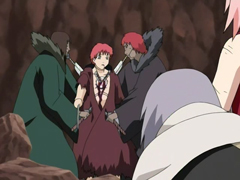 Quite a bit of flashback again, but this time they were pulled off appropriately so it didn’t really feel as if the story was being dragged longer. Well… not that obvious anyway. Chiyo-baa finally figured out Sasori’s secret and attacked his one weakness, the piece in his chest, although it was later revealed that Sasori should have seen it coming but he chose not to avoid it. She also used her forbidden jutsu to revive a dying Sakura at the cost of her own life energy.

As a parting gift, Sasori revealed to Sakura about a meeting with one of his spies that he had planted in Orochimaru’s group. Just as the episode was about to wrap up, Kakashi unveiled his new ability – Mangekyou Sharingan. You would probably expect the next episode to be Kakashi showing off his new skill and pawning Deidara but from the episode preview it looks like we might have to wait slightly longer. Next episode would focus on the conclusion of the battle between Team Gai and their clones. 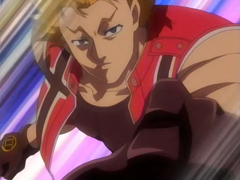 The 2nd Fist, Berserker, makes his move against the Shinpaku alliance and Kisara’s team. He made easy work of the two allied teams who were having a gathering. However, because the leaders of the groups were having a separate meeting, so Berserker began to hunt them afterwards. He met up with Takeda and Ukita, who proved to be no match against the 2nd Fist. Nijima puts his escaping skills to the ultimate test by going up against Berserker in an attempt to trap the Fist in an elaborate trap. At the same time, 3rd Fist Freya appeared before Miu and Kisara. 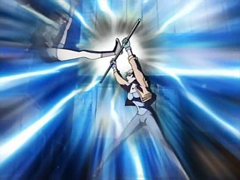 Just when Nijima thought he’s a goner, Siegfried appeared to save the day. Siegfried put up a great fight against Berserker, but as he himself admitted, Berserker’s fist style is his counter-attack styles weakness. In the end, he tried to sacrifice himself by taking Berserker down with him, but his plan backfired and was rescued by Akisame and Sakaki.

The highlight of the episode was the battle between Kisara and Freya. Kisara’s kicks seemed like they were no match against Freya’s staff and was beaten to the ground many times. Then she realized that Miu had managed to take care of the Valkyries without a scratch and tried to copy her movement. Miu noticed this and shouted out some hints which helped Kisara to overcome Freya’s staff. 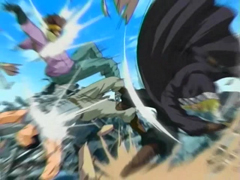 Kenichi received a strange mail from Nijima and begged the Elder to return to town. The Elder agreed and they began to make their way back to town, with Kenichi hanging for his dear life on the Elder’s shoulder as he ran top speed on top of power lines towards town.

Just as Nijima thought he was doomed, former 7th Fist Thor appeared to save the day. He wasn’t the only one, though. Hermit, too, came to pay his debt to Loki.

Odin and Berserker came out to stop Loki’s assault. Loki took the chance to reveal his plan, to recreate a new Ragnarok with him as leader. But it quickly backfired as Berserker remained loyal to Odin and made quick work of Loki and his new team.

Thor tried to create a path of escape for Nijima by going up against Odin, but he was no match at all. Odin was about to finish Thor off when Kenichi fell from the sky, landing in between Odin and Thor. The next episode promises to be a good one with the showdown between Hermit and Berserker.

Yutaka is about to discover the ugly truth of reality as she tries to approach Konata and Yui to help her with her homework. Konata then asked Yui if she knows how to solve her own homework and immediately commented that she probably doesn’t know how to. Yui came back by telling Konata why ask if she already knew the answer. Konata’s father got depressed because Konata never goes to him for help.

Kuroi-sensei seems to feel the same way as Konata’s father. She got real happy when Konata finally came up to her with a question, but that didn’t last long when Konata’s question was related to a game instead of academics. Kuroi-sensei also owns a Wii! *jealous*

Yutaka asked Tamura about the types of manga she draws, which was difficult for her to answer. Later on she showed some of her newer drawings, one of which is Housuke Odoroki from the Nintendo DS game Gyakuten Saiban 4 (BTW, Gyakuten Saiban/Ace Attorney is one of my favourite game series on the DS :D) The other character looks strangely familiar as well.

And Akira finally sent Minoru away on a trip to Mt. Fuji’s forest to bring her a bottle of the famous Mt. Fuji forest’s water (whatever that is…).

Did you notice… Miyuki’s mom was holding a copy of Ju-On and Yui was holding a book with Fate/Stay Night on the cover. Yutaka, Iwasaki and Tamura saw 2 people cosplaying as Full Metal Alchemist characters – one as Edward Elric and another in a Federal Alchemist uniform.

Shu’s awakened Blue Dragon went on a rampage and had to be stopped by Jiro’s Minotaurus. Zola indirectly tries to convince Shu to join her group by pushing him into a corner. Shu hesitated at first but after the village was attacked once more by Grand Kingdom, he decided that he would follow Zola whole Kluke decided to follow Shu. I’ve always wondered why people would let the enemy mech to merge before attacking, and Zola exclaimed that the world isn’t as forgiving, attacking the combining enemy mech as they tries to merge into a single unit.