Posted by Neko Kyou in Reviews on September 16th, 2007

Episode 5: The Power of Love 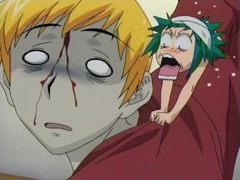 Seiji was late for school. The gym teacher was already closing the gate when Seiji was approaching. Seiji jumped over the gates and landed one of his foot on the gym teacher’s face before running off to class.

While Seiji was taking a leak in the toilet, the gym teacher knocked the door open and pulled him out so that he could use the toilet instead. Angered, Seiji gave the door a kick, knocking the door off its hinges, falling directly on to the teacher.

During gym class, the students were playing volleyball. One of the smashes hit Takamizawa on the face, and he somewhat faintly recalled about Midori.

Since Seiji couldn’t use his right hand, he had to skip gym classes. The gym teacher, clearly unhappy, made Seiji do push-ups with only his left hand. Back home, Seiji ordered for pizza and took a drink from the fridge. He mistakenly took a bottle of his sister’s sake, got drunk and was knocked out. Midori decided that he would help Seiji with housework while he was unconscious. However, things got out of hand as various people arrived at his house. I seriously pity how Midori drags him around the house lol

Seiji woke up feeling all fine and rested the next morning but Midori fell sick instead. Seiji skipped school to stay at home and take care of Midori the whole day. It seemed that Seiji skipped the next day as well.

Seiji went back to school after Midori recovered and the gym teacher made Seiji do 100 chin-ups on the poll if he wanted to get credits for that class. Seiji managed to do 99 chin-ups with only his left hand but slipped on as he tried to do his hundredth. Luckily for him, Midori went up and grabbed the poll to help him do the final chin-up. 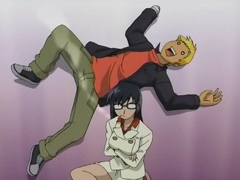 Shiori’s father and step-mother is going on a family outing, but Shiori says she doesn’t want to go because he wants his father, with his newly wed wife, to have some quality time together. And so she went and got Seiji to keep her company for the day instead. It’s quite obvious that the real reason she didn’t want to go along with her parents is because she was being stubborn about her new step-mother.

Ayase caught glimpse of Seiji and Shiori together and started following them from behind, fantasizing about how Seiji might prefer younger girls and getting all worried and flushed. After taking pictures together, Shiori pulled Seiji into the arcade, where Rin happened to be playing a game of mah jong.

Shiori challenged Seiji to a versus game that looked a lot like Street Fighter. Seiji lost easily since he could no longer use his right hand. However, he started giving instructions to Midori that helped level the playing grounds a little, but it wasn’t enough. Just as Shiori was about to give Seiji the finishing blow, Seiji’s character suddenly began attacking ferociously and defeated Shiori. Shiori jumped up to congratulate Seiji, only to find that he was flat on the floor and Rin had taken over his place.

Rin took the opportunity to torture Seiji to coach Shiori on how she can win Seiji’s affection. What surprised me wasn’t the fact that she had a little girl doing all those weird stuffs, but the fact that Shiori actually went along with it! She even got Shiori waiting for Seiji in the bath!

Midori suggested that Rin might be behind it and Seiji immediately went to confront his sister. In a drunken state, she revealed Midori to Shiori, who then fainted. Fortunately, Seiji managed to convince Shiori that she fell unconscious in the bath and she had dreamed the whole thing up.

Shiori’s step-mom came to pick her up but she refused to go back at first. They got into an argument and Shiori finally let out her true feelings. Her step-mom couldn’t take it anymore and gave her a slap for spouting nonsense, and explaining that she really only wanted to get along with Shiori. Shiori finally realized the truth and became much more friendlier with her step-mom.

Ayase finally picked up her courage to invite Seiji for a movie date. Seiji, being oblivious as he is, fell for the oldest trick in the book about her friend who couldn’t make it for the movie. 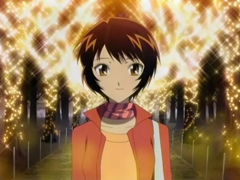 Ayase spent the entire night devising a plan for the date that would help her win over Seiji. Seriously, who is she trying to kid?

Her second plan was the “doki-doki cling” plan, where they would go through an extremely crowded street. Ayase would pretend to trip and fall right into Seiji’s arms. Instead someone bumped into her, and she ended up hugging a Colonel Sanders lookalike statue.

Third plan – “Get his heart by clinging” plan. Ayase had memorized all the best times for the 4 screaming opportunities, but apparently Seiji had better timing. The first chance failed because Midori screamed and startled Ayase. The second chance failed too as Seiji bent down to pick up his falling bottle. The third time was another miss with Seiji stretching back yawning. The fourth and final chance was a no-go as well with Seiji sneezing. Even Midori was beginning to feel pity for Ayase.

Ayase tried to touch Seiji’s hands but instead she was touching Midori instead. Seiji began to panic and quickly pulled over the hand of the old man sleeping on Seiji’s left side and put it over Ayase’s hand so he could pull Midori out.

After the movie, Ayase invited Seiji for dinner and he agreed. But before they head to Ayase’s place, she wanted to do some shopping first – for some new swimming suits. Too bad for her that Seiji rather fill his stomach first rather than watching Ayase putting on different swimsuits.

They were walking through the park on the way to her house when she turned around just in time for the lights to come on, a truly romantic scene indeed… if she didn’t freak out when Seiji pointed out a bug on her shoulder.

In the end, she decided to use her final strategy. Her “You must take responsibility” plan is to tempt Seiji to peek while she’s taking a bath and having him to “take responsibility” over what he’s done. Seiji walked up to the bathroom door as she hoped, but instead of opening it, he told Ayase that he’s smelt something burning. Ayase had completely forgotten about the dinner on the stove and quickly ran out of the bathroom without putting anything on, saw Seiji outside and fainted.

By the time she regained consciousness, Seiji had already left. He left a note saying he’s eaten and left, and told Ayase not to overwork herself. Ayase went all red when she realized she wasn’t wearing anything before and now she’s wearing her clothes. HmMmMm…

On the way back, Midori asked Seiji to bring her to a place that’s special to her. Seiji refused at first but after Midori promised to make him some burger when they got back he totally went for it. After all, even Seiji couldn’t eat burnt stew it seems 😀 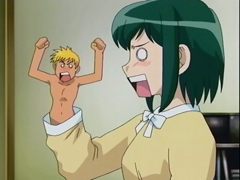 Seiji woke up after being called by Midori a few times and when he opened his eyes he saw a giant Midori staring down at him. He had become Midori’s right hand!

Okay, something obviously wasn’t right here. First of all, Midori’s real body should be at her own home. And where was Seiji’s real body if he had become Midori’s right hand? Anyone could easily guess that this was all part of a dream sequence, especially when the same scenario repeated itself later on, but from Midori’s point of view, doing what she feels like instead of what Seiji would rather do like in the previous scenario.

On their way to buy clothes for Seiji realized how much Midori must have suffered hiding in bandages. At the doll shop, Midori started to have fun by putting on many different costumes on Seiji. While Midori was busy finding new costumes for Seiji, he noticed another guy slipping his phone under Midori’s skirt and taking pictures. He was about to lose it when Takamizawa caught the guy instead. He then realized how helpless and inconvenient it must have been for Midori as his right hand before.

Midori got second thoughts as the door to the shop slide open and she saw it full of guys checking out the dolls and accessories. She started walking away and told Seiji that she would buy some materials and make new clothes for him instead. While they were talking, Iwasaki, a classmate of Midori, came up and literally pulled Midori away for a drink. While Iwasaki was talking about what has been happening lately, Midori realized that time continued to move for everyone even while she was stuck being Seiji’s hand (not that she would really complain actually) and started to cry. Seiji told Midori to go after her friend after she’s left and when Midori ran out of the cafe doors, the alarm rang and both Seiji and Midori woke up.

Back in reality, they both went about the morning as usual, washing up and having breakfast. That night, Midori was acting a bit weird and when Seiji asked about it she mentioned the dream she had. Seiji said he has the same dream, that he also knew some of Midori’s feelings and told her to not be bothered by it.

After Seiji had fell asleep, Midori wondered to herself why she had cried and what she planned on doing by going after Iwasaki. I would probably guess that she subconsciously realized that she can’t stay on as Seiji’s right hand forever and that she actually yearns to return to her normal life, but at the same time, she doesn’t want to leave Seiji’s side.