Posted by Neko Kyou in Reviews on September 7th, 2007

I watched this series from start to finish in a single sitting (with breaks for “refueling” my snacks and for toilet of course) yesterday as I’ve mentioned in my previous post, Midori no Hibi Marathon.

There are only 13 episodes in Midori no Hibi, so it was rather short but sweet. I might go for the manga next. But anyway, on with the review for the anime.

What is it about?

Sawamura Seiji is a well known delinquent with his famous “Devil’s Right Hand”. At 17 years old, he has never had a girlfriend before in his life and had been rejected at least 20 times. Most people feared him for his reputation as “Mad Dog Suwamura”. While he was being frustrated about not having a girlfriend in his room, he shouted out that anyone would do as long as he can get one. That was when a girl’s voice was suddenly heard, happy to hear Seiji’s words.

Seiji was panicking badly when he heard the voices and was almost shocked silly when he discovered a girl had replaced his right hand. The girl was none other than Kasugano Midori, a 16 year old girl from another school who has had a crush on Seiji for 3 years.

Although she was very shy and had no self confidence in her real body, she became quite open and upbeat while being Seiji’s right hand. She sometimes pulls of crazy stunts for Seiji’s sake, such as helping him fight other delinquents who were after Seiji.

Midori’s real body suddenly fell into a coma and when she woke up she found herself as Seiji’s right hand. However, she seemed less surprised as Seiji as she quickly adapted and happily accepted the fact that she was now a part of Seiji.

Midori no Hibi is a romance comedy as Seiji goes through his daily life with Midori as his new right hand. Because he could no longer fight with his “Devil’s Right Hand”, he tried to avoid unnecessary fights not just because he couldn’t use his right hand anymore but also to keep Midori safe.

Even though Seiji often acts as if he doesn’t care about Midori, deep inside he actually does care and often look out for her especially when she’s sick or when she’s troubled. However, much to Midori’s dismay, he can be quite oblivious to the fact that Midori is really a girl who likes him even though she had become Seiji’s right hand.

Midori likes Seiji because she says that Seiji is really a kind person who has a big heart. While the other students sees Seiji as just a delinquent, she understood that Seiji doesn’t pick his fights just because he wants to, but rather because he has to in order to protect others. Midori also personally witnessed some of these events as she was together with him.

Throughout the series, Midori also discovered that Seiji wasn’t as unpopular with the girls as he thought. There were a few others who liked Seiji but he just never took notice. Midori often gets uptight and frustrated as she watches the other girls trying to make a move on Seiji although he continues to be clueless. 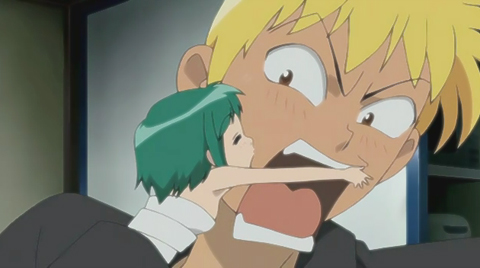 The anime put a lot of emphasis on Seiji and Midori with other characters making very little appearances except for maybe Ayase, who has a crush on Seiji as well after he saved her from a bunch of delinquents. Another memorable character was Seiji’s older sister, Rin, although she only appeared in 2 episodes. From what I’ve gathered, the manga gave a lot more emphasis on side characters compared to the anime. But it’s not really a bad thing as it allows the relationship between Seiji and Midori to grow at its own pace and drawing in the other characters only when they need to be there to further move their relationship. 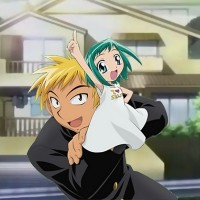 I really should have watched Midori no Hibi sooner. Maybe it’s because no one has really recommended the series to me before so I never really bothered, but it would have been such a waste if I hadn’t decided to pick it up suddenly.

The ending was awesome as well. There are really only a few anime where I feel that the ending is good, and Midori no Hibi is one of them. It leaves the viewer satisfied and content. I wouldn’t spoil it here but I would rate the final episode 9/10.

It’s not as crazy as Ranma 1/2 or Love Hina, even though the idea of having a girl becoming a part of your body is crazy in itself, but it’s still full of entertainment and laughter. If you’re into sweet, romance-comedy, Midori no Hibi is definitely for you.

I would probably be doing a single post review of every episode of the series instead of putting them into a Weekly Review. It might take a bit longer to do since I’m way behind on my reviews after my week long vacation and I wouldn’t want to pack too much into a single weekly review as well. Not to mention it would be much more fun this way since I did finish the series in a single marathon. Watch out for it!

If you’re interested, you can grab Midori no Hibi here.

** Update – You can now read up on my Midori no Hibi episodes review here.

3 Comments to “Midori no Hibi Review”