Posted by Neko Kyou in Reviews on September 20th, 2007 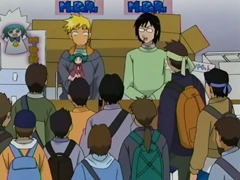 Takamizawa has been haunted by blurred images of Midori in his mind ever since he lost his memories about her. He went crazy trying to remember what those images were and bumped his head on the closet, knocking down a few items that was on it, one of which is a memory card with the words Midori on it. He finally remembers who Midori was after viewing all the photos he had taken before of Midori that was in the memory card.

Seiji came out of the supermarket grumbling about having to eat tofu steak until he receives his allowance when he felt like he was being followed. He quickly turned around and chased after the culprit and sure enough, there was Takamizawa secretly following him and taking pictures of Midori.

Takamizawa explained how he got his memory back and even showed them his new homepage dedicated to Midori. Apparently the homepage was quite popular, with over 500,000 hits already. Seiji was impressed, but at the same time he also went berserk, threatening Takamizawa to close it down. If you asked me, he was a bit overprotective here 😛 Why would he care so much when Midori hasn’t even objected to anything yet? On the contrary, Midori seemed to like it.

Takamizawa agreed to close it down, but only if Seiji would help him with some work. He also promised to pay Seiji for it, so Seiji was all for it.

Seiji and Midori ended up at a comic convention, where Takamizawa had a booth waiting to sell Midori dolls. Small demon Midori-chan is my favourite among the bunch XD

Seiji resisted at first but quickly changed his mind when Takamizawa mentioned that he was going to split the profits with him. However, he wasn’t very enthusiastic and no one came over to their booth. Midori then volunteered to help draw attention by pretending to be a doll herself, which proved to be successful as they quickly sold out after that.

The crowd then started to bid in order to buy the final “original” Midori doll left, including a celebrity actor. Of course, it was impossible for Seiji to sell off Midori, and he started saying that Midori is not for sale at any price and that she is precious to him. Touched, the entire crowd applauded him for being such a true doll mania (even a God!?) and took a picture together much to Seiji’s objection.

Now that Seiji has money thanks to his “job”, he happily went to the supermarket once more to buy some real food but was scared away by a creepy looking Takamizawa. Seems that Takamizawa fell in love with someone and wanted Seiji to help him out. Seiji refused but changed his mind again after being persuaded by Midori. He sure changes his mind a lot if you ask me 😛

Much to Seiji and Midori’s surprise, the girl that Takamizawa likes looks exactly like his favourite Marin-chan doll. After some thought, Seiji decided that they need to help Takamizawa to fail in order to protect the poor girl from being victimized by Takamizawa.

Seiji had Takamizawa dressed up like a Yankee-style delinquent, believing that he would scare the girl away. But his plan backfired completely when the girl actually thought Takamizawa looked cool. Seiji decided to use his final resort. He disguised himself as a gang member and approached Takamizawa, hoping to scare him away instead, but to his surprise, Takamizawa stood his ground to protect the girl.

Seiji thought that maybe he was wrong about him and decided that he would lose to Takamizawa. But instead of losing to Takamizawa, Seiji got bashed up badly by the girl, who appears to be an even bigger delinquent that Seiji. Takamizawa realized that the girl was nothing like his beloved Marin-chan and ran away but the girl continued to chase after him.

Episode 10: The Distance Between Hearts 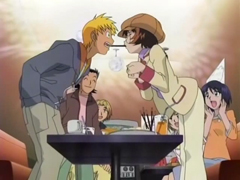 Ayase was invited by her friends for a gokon at a karaoke box, a group date where girls and guys get acquainted. When she arrived she was shocked to see Seiji and his friends there. In order not to let them realize who she was, she put on a hat and glasses to disguise herself. I’m simply amazed that they did not figure out who she really was. Even Seiji thought that Ayase was the type of girl he’d like and got really excited.

Seiji signaled Miyahara who then suggested that they play the King’s game (it’s a game where someone becomes the King and whatever he says must be followed). He randomly called out person A and D (who were actually Seiji and Ayase) and ordered them to eat a chocolate stick from the opposite ends. The idea is after they’re done eating, they would end up kissing each other. Seiji looked real vicious as he chomped down the chocolate stick as quickly as he could, but ended up receiving an uppercut from Ayase as he almost reached his goal.

While walking to school the next day, Seiji was complaining about what had happened yesterday when he suddenly felt that someone was yet again following him from behind. This guy must really have a good sixth sense since Midori’s childhood friend, Kouta, was indeed tailing him secretly.

It’s kinda funny watching Kouta trying to be brave but ended up being more afraid. After school Kouta continued to stalk Seiji and everytime he walks up right behind and tries to speak, he got left behind. But he finally gathered enough courage to speak out louder to get Seiji’s attention.

Kouta tried to convince Seiji to follow him to Midori’s house, but Midori prompted Seiji to refuse. Despite what Kouta says, it’s pretty obvious that he likes Midori, and Seiji could sense it as well especially when he went all red when Seiji asked him about it. 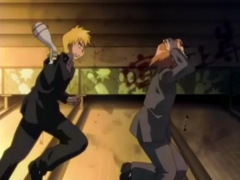 Midori stood by the roadside waiting for Seiji to appear. When he finally came around the corner, Midori’s face lightens up but quickly turned gloomy as Seiji continues to walk pass her. She had lost her courage in the last minute again.

Seiji was getting frustrated revising for his exam the next day and suddenly had an idea. He would play a game with Midori and then when he wins, he would have her do the test for him. But he lost 3 times straight in a row and had to do what Midori wants instead.

Midori wanted Seiji to say he likes her, even if he didn’t really mean it. Seiji tried to force himself to say it, but just couldn’t do it and brushed it off for later. It’s interesting to note that he couldn’t say it to Midori for some reason even though he’s done it countless times before with other girls. Perhaps its because he knows that this time Midori really does like him and somehow feels embarrassed and awkward.

Back at Midori’s house, her mother has arranged for monks, shamans, and the likes to try and wake up Midori. Kouta was against the idea, but Midori’s mother said she would try anything at this point.

Ayase once again comes up with a new plan to win over Seiji, the “lovely note proposal” plan. She was planning to give Seiji her notes for the exam on a notebook decorated with hearts. Unfortunately, Seiji didn’t even take notice of what she was really trying to do and her plan failed once more.

Kouta, inspired by Midori’s mother’s words, decided to try to convince Seiji once more to try and wake Midori. He bumped into a group of delinquents outside Seiji’s school. He mistook them for Seiji’s friends and said some stuff which he really shouldn’t have said and ended up getting dragged away by them. Kouta really has a wild imagination and a big mouth for such a small boy for his own good.

On the way back from school, Seiji walked pass the fountain that was a special place for Midori. Midori started to recall the last time they were there and said she wished they could stay like that forever. Seiji replied that they could come anytime, which left Midori very happy.

Seiji went to his usual place for lunch. He started to complain that the service was slow when his food finally arrived but quickly become all lovey-lovey when he saw how cute the waitress was. 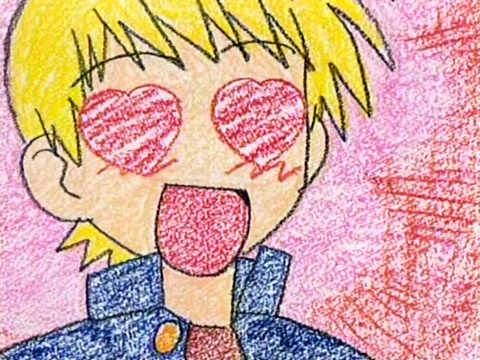 Seiji turned all lovey-lovey when he saw the cute waitress…

Just as Seiji began to dig in, Miyahara came and told Seiji about Kouta, he quickly took off to their hideout, which is an abandoned bowling alley that’s pretty much in ruins. Seriously, I can’t stand Kouta and the way he talks. Someone needs to beat some sense into the boy. Luckily for me, the delinquents put a tape over his mouth which stopped him from speaking.

Seiji appeared and took off the tape (nuuu!!! why’d you do that!?) and started to fight the delinquents. This bunch seems to be tougher as they were able to stand Seiji’s punches and even pushed him across the lanes. Kouta tried to help but was pushed down instead, knocking his head in the process. Midori couldn’t take it anymore and took up a nearby bowling pin and helped Seiji take care of the delinquents. After the fight was over, Kouta saw Midori on Seiji’s right hand while he was still dazed from the fall and fainted right after.

Click here to get Midori no Hibi DVD Box Set