Posted by Neko Kyou in Weekly Review on August 19th, 2007

Slow week due to final exams. I’ll try to elaborate more since there’s only 3 episodes. 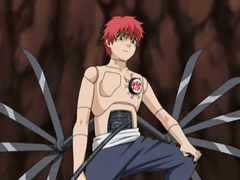 After last week’s episode, almost any half decent Naruto episodes would start to look real good. Fortunately, this week’s episode wasn’t half bad. No Team Gai – BIG plus there. Not much time wasting either – at least Kakashi is doing something different other than jumping from around trying to get Naruto to slow down. This episode was actually quite speedy compared to the drag we’ve been treated to the past few weeks.

Sasori finally shows his true self, which explained why he didn’t look a day older than he did when he left the Sand all those years ago. He had turned himself completely into a puppet, the strongest of his arsenal. The next episode promises to bring the battle a lot closer to an end, although based on experience, the actual meaning of “10 Puppets VS 100 Puppets”.

The Akatsuki discussion segment at the end of the episode was quite entertaining as well. I find it the most interesting segments compared to the rest and hopefully we’ll get to see more of it 😀 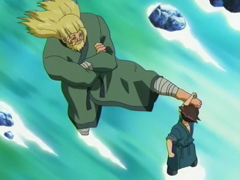 Not a very exciting episode and there really isn’t any funny moments in this one, unless you count the part where Kenichi was chased by a bear, which was quickly taken care of by Ogata Ishinsai, who turned out to be the person who would have been Ryouzanpaku’s first disciple if it weren’t for the Elder’s objection.

One of the Elder’s objective to bring Kenichi to Yamigata was to test whether Kenichi would accept the invitation of a “dou” user, a fighter who uses their anger to gain massive destructive power. To do that, the Elder had planned for Kenichi to meet with Ogata, a dou type fighter. It was later on revealed that Ogata is none other than Ragnarok’s Kensei.

The second objective was to train Kenichi in Seikuuken. The draft behind his head that Kenichi kept feeling since entering the forest was actually the Elder kicking behind him, testing to see if Kenichi had realized the basics of Seikuuken. The fish catching exercise turned out to be the training Kenichi needed to achieve that. The real training for Seikuuken began at the end of the episode.

Being the first episode, there really isn’t much in it except for character introduction. Zola quickly stood out among the rest as being the cool type character for this series and I immediately took a liking to her. Zola and Jiro went to a ruins nearby a village in search of the Blue Dragon and met Shu and his pals there.

Shu had heard that a Knight Master was in town and decided that he would join up with him as a disciple. Shu picked a fight with Jiro and just as Jiro was about to unleash his power on Shu, Zola appeared and interrupted. Mistaking Zola as the Knight Master, Shu tried to convince Zola to take him as a disciple, but was shot down instead with a question he could not answer.

The village then came under attack from the Grand Kingdom and Shu rushed to the ruins to get Zola for help. However, Zola refused and Shu, angered, rushed back to the village with his friends to save it. Just before Shu reached the village, Zola purposely attacked one of the enemy’s aircraft and caused the attackers to become even more hostile. Things got worse when Shu and his friends finally arrived and confronted the army from Grand Kingdom, but was quickly captured.

That’s when Zola finally showed up and attacked the army. The commander realized who Zola was and challenged her with his Shadow, Goblin. Zola responded with her own Shadow, Killer Bat. The battle between the 2 shadows caused a building near where many civilians were and the debris threatened to flatten them all. Shu rushed in, remembering Zola’s questions earlier which now suddenly made more sense to him. As Shu leapt under the falling pieces, the Blue Dragon manifested from his shadows.