Posted by Neko Kyou in Weekly Review on November 11th, 2007

This might be the last weekly review I’ll be doing. I’m beginning to find the need to review multiple episodes of anime in a single post to be quite tiring so I wanna try to do it the more “common” way which is to do a review of it right after I’ve finished watching it. It would probably save more time and trouble since I would be more pumped up right after watching the episode.

Episode 33: The Next Target 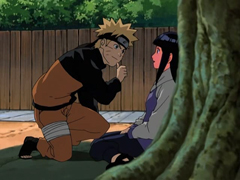 Team Kakashi and Team Gai finally made it back to Konoha. Kakashi ended up in the hospital and needs to stay there for a week, and Sakura told Tsunade about what Sasori had said. Shizune tried to convince Tsunade not to let Naruto go on the mission but as Tsunade expected, Naruto had already overheard their conversation.

Naruto immediately left to find new team members for their new mission and he slowly ran into Team Kurenai’s member one by one.

It’s kinda hilarious to see how sensitive Shino had become, although Naruto did have a point. Shino is even more covered up than he used to be, it would be quite a miracle if the dense minded Naruto could recognize him straight away.

It’s also been a while since we’ve last seen Hinata’s nervous antics. Unlike Sakura, Hinata had actually grown a little. Physically, that is. The best part has got to be when Naruto told Hinata to “shut up and follow him”. If only Sakura was there too XD

And Sai finally made an appearance. Judging from his skin colour, I wonder if he’s even alive.

He’s not being dense. He’s just pretending to be. He enjoys having a loli that clings to him wherever he goes. Just look at his expression. Someone get Khamsin back and have him squash Yuuji with his uber precision and make it look like an accident.

Ok, seriously though, I’m very disappointed that there hasn’t been any real action yet so far. While the love-hate thing going on is interesting to say to least, it’s not what most fans have come to expect from Shana. We expect tons of enemies showering upon the Flame Haze, Shana’s explosive sword fights, Margery’s lame attempt at poetry and Marco’s infectious laughter in battlefield.

Instead so far we’re getting a love triangle that isn’t going anywhere with one of the most dense character in history, ever. He doesn’t even have the slightest idea which is not only annoying Shana and Kazumi, but fans as well. This isn’t Shuffle, damnit! This is Shana!

Happy that some other couple is having better progress compared to said person whom I wish dead.

Well, at least there’s some growth between Shana and Wilhelmina’s relationship. Shana seem to finally realize how much she means to Wilhelmina and vice versa (although I thought they made it quite clear at the end of the previous season). Then again, no one seems to really remember all the things that were said and done at that time.

Jin finally discovered the truth behind the shuttle incident that took everything away from him. The true culprit wasn’t his father’s carelessness but an alien life from Thanatos, a dragon.

Jin and Kazuki are finally united after 2 years. However, it doesn’t seem like it would really be a happy reunion, especially when Kazuki pointed a gun at Jin.

One of the Dragonauts, Amagi, goes mad after shooting Toa and caused his dragon, Spirytus to transform and go berserk. After chomping up his master, Spirytus chased after Jin and Toa.

Toa was then forced to reveal her true form in order to fight against Spirytus and a shocked Jin discovered that the one person he truly trusted was also a dragon.

I can’t exactly say that the dragon CGs are good looking, but they’re pretty cool nonetheless. The scene when Toa transformed and confronted Spirytus reminded me of the 10th Pokemon movie – Dialga vs Palkia vs Darkra in more ways than one…

The battle between dragons intensified as more dragons joined in the fun. What’s interesting is that the dragons each have a cockpit of sorts that allows their masters to pilot and control them.

It’s pretty hard to get any real good look on the dragons (except Toa) since they’re pretty dark and they’re battling in the night sky.

Gio awakened as well but unfortunately for Kazuki, Gio doesn’t seem to care for anything except Toa. Looks like Gio might have some connection with Toa since he said he was born to protect her. Now Kazuki has a reason to hate Jin 😛 It would be interesting to see how things turn out.