Posted by Neko Kyou in Weekly Review on October 29th, 2007 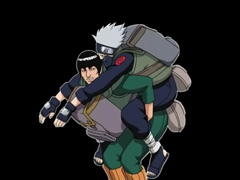 First off, Tobi’s voice is fail. I was really expecting something more smooth and boyish. Then again, all the newly introduced Akatsuki members in the anime had totally different type of voice than I’d imagined. But Sai’s voice is quite fitting (although maybe I’m just partial to Satoshi-san 😛 ) Maybe I’ll grow to like it, just as I did with Deidara. But I just can’t imagine Tobi’s voice staying like that after… well if you’ve read the manga you’d probably catch my meaning.

This episode is also quite a drag, but thankfully it’s truly the end of rescue Gaara arc. The joke after the episode of the Sand shinobi’s not going to show up for a loooong long time to come was pretty funny especially if you’ve read the manga up until now. Absolutely no trace of the Sand, unless the anime decides to come up with fillers.

Like the previous episode, the overall mood is pretty sombre up to the point when the Konoha team starts to leave for home. When Gaara reached the village, he was surprised to see that everyone was waiting and cheering for him. Again, as a sign of respect, Gaara had Chiyo-baa’s body enter the village first as everyone prays silently.

Thankfully there isn’t much flashback especially at the gravestone scene. I was afraid that Sakura will be showing plenty of flashbacks on the battle against Sasori, highlighting Chiyo-baa.

Things get a little bit crazy after the Konoha teams left. Gai was so irritated that he couldn’t move fast while helping Kakashi to walk that he decided to piggyback him instead. The look on Kakashi’s face pure gold. It’s like saying that he rather be left behind to rot instead of being piggybacked by (and especially) Gai. 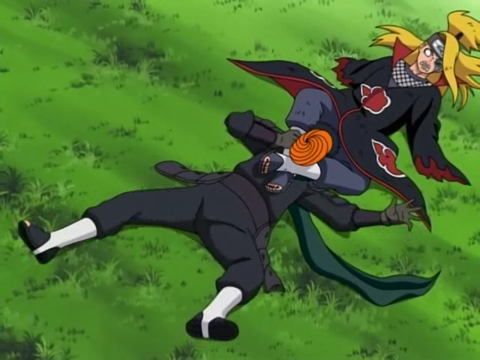 I know Bal Masque is planning something… I just wish I knew what! The slow build-up is driving me a bit crazy. It’s obvious Bel Peol is up to something, but it has been so random and meaningless so far. Konoe Fumina is probably not Hecate herself, but its obvious that Bel Peol has something to do with this. One thing is for sure though, she does act a whole lot like how I would imagine the real Hecate would be like.

Konoe really acts like a Princess who has everything done for her and so naive as well. Although her instinctive behaviour that always tries to be nearby Yuji is kinda puzzling. Is Bel Peol trying to distract and confuse the Flame Haze, diverting their attention elsewhere while she conducts a masterplan to get hold of the Reiji Maigo?

Hopefully we’ll find that out soon and have the superb Flame Haze vs Tomogara action which was what made the first season such a success.

I initially expected Dragonaut to be something like Fate/Stay Night based on the trailers, but the vibe I’m getting after watching the first episode feels more like Eureka 7 and Gundam, although its also way different from those two.

The first episode sort of pulls you in by baiting you with questions and half answers, making you want to know more and continue on with the next episode. The intro showed some interesting looking CGs, which looks a lot like dragons (It never occurred to me until now that the title had something to do with dragons *sigh*) so I’m really looking forward to seeing them.

Jin lost everything when the shuttle him and his family was on exploded right after launch but he somehow miraculously survived. Hailed as a hero for being the sole survivor, he was later on turned into a public enemy when investigations revealed that the cause of the explosion was due to pilot error, who was his father.

Of all the new anime I’ve watched this season, Dragonaut seems to have the most potential judging by just the first episode.