Posted by Neko Kyou in Weekly Review on October 14th, 2007

I actually have a lot of anime which I would have liked to watch last week and this week, but as I’ve mentioned before I’ve been quite busy

Hopefully I’ll have more time next week. Haven’t even got around to writing the episode reviews for Code Geass.

Your Under Arrest: Full Throttle Episode 1

I had actually thought that we were shown a flashback from the first season since the scenes and conversations were very similar. It didn’t take long before Yuji realized that something really weird was going on, especially with the appearance of Friagne the Hunter.

After the battle with Friagne, Yuji tried to ask if Shana or Alastor felt that anything was wrong. They totally ignored Yuji’s comments. After school, he tried asking the same to Wilhelmina but got the same response.

Yuji knew then that this had to be the work of a Guze no Tomogara or an unrestricted spell so he tried to look for Margery at Satou’s house. However, the matter what route he takes, he always ends up at the same spot.

Back home, Yuji pondered on what has been happening some more. After a while, he came to a conclusion that perhaps it was the other way round then what he had thought. Pretty smart for Yuji if you ask me 😛 He decided to test out his theory by asking his mom a question which she would not answer.

The scene where the Aizen twins attacked Shana appeared, and Yuji decided to further test his theory by intentionally letting go of the ladder to fall down, but instead he floated up to Shana’s side. Shana looked at Yuji and did not speak, confirming Yuji’s theory once more. He was in a dream world made up of his memories.

He allowed Sorath so slash him with the Nietono no Shana and finally managed to return to reality, where they were actually fighting a weak Guze no Tomogara. Shana managed to make quick work of her, but she seemed to be mysteriously happy even when she was slashed in two. Obviously this isn’t the last we’ve seen of her. Yuji tried to recall what he wanted to tell Shana but could no longer remember the dream world he was in.

As they continue to make their way to school, Yuji asked what Shana had said right before Alastor was summoned back in Seirei-den. I used to thought that Yuji was a bastard for not responding to Shana back then – apparently he hadn’t heard the last and most important word Shana had said. After a year, we’ve finally discovered the truth~!

It was really funny hearing Alastor sounding embarrassed for Shana lol. All in all, the first episode is really just a prologue for some sinister plan cooked up by the Bal Masque group.

First impression of Setsuna – Sousuke Sagara of FMP. I mean, the whole small kid with a machine gun in middle-east style war-torn towns with mechs seriously does remind me of Sousuke’s childhood as a mercenary. The only difference here is a Gundam came to save the day.

I’ve heard a lot of good remarks about Gundam 00’s first episode, but I really didn’t see what’s so great about it. Maybe most people were just happy that there wasn’t any signs of Kira, Freedom or Archangel. Meh.

But I must admit that the show exceeded my expectation. The animation was better, and the Gundam units weren’t that bad, especially Dynames and Kyrios. I still think Exia looks like it’s missing a few parts somehow. The AEU model reminded me of Zone of Enders.

Character-wise, I didn’t really like any of the Meisters. Especially Tieria. Up until I heard him speak, I’ve always thought that he was a “she”. I almost choked while drinking when I heard him speak. I do like Graham Acre and Wong Ryumin, though XD

For once, no Gundam was stolen or taken away from an opposing force. The 4 units seemed to have been built specifically for the Celestial Beings organization.

The first episode doesn’t really have much story or character showcasing. It’s all about what the Gundam units could do. I have a spark of hope for this series, but I’m much happier with some of the other series this season right now. 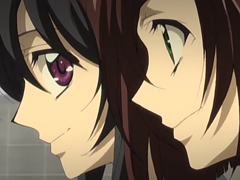 After 6 long years, the entire Bokuto crew is back to put you under arrest once more. Full Throttle (Charlie’s Angels?) picks up where the 2nd season left off and both Miyuki and Natsumi were coming back to Bokuto station.

Miyuki met a young boy, Randy, at the airport. As fate would have it, they were both heading towards the same destination and were seated right next to each other as well. The both of them became very friendly after a few rounds of gaming on Miyuki’s laptop.

After they landed, Miyuki found Randy was still around and no one had came to pick him up. But soon after a mysterious man in black came and started to drag Randy away. As he did so, Randy turned around looking distressed, and suddenly called out Miyuki for help.

Miyuki grabbed an otaku’s bag and used it to knock the *MIB* away. She pulled Randy with her as she hopped into a van and drove off with it. The man got into a black car driven by another person and started to chase their van.

Natsumi saw the chase on TV and easily recognized Miyuki’s driving style and went off with a bike to go after her. The mighty duo was finally reunited when Natsume finally caught up with Miyuki and immediately pulled their infamous insane Miyuki turning + crazy Natsumi manual brake technique, causing their pursuers to crash into the police roadblock.

To a first timer watching the series, I would admit this probably looks a bit weird and silly. But to a long time fan of the series, it rox! 😀