Posted by Neko Kyou in Weekly Review on October 7th, 2007 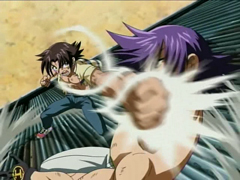 The first few minutes were spent recapping on the highlights of the previous episode where Kenichi were mimicking his masters and easily overwhelming Odin. It’s easily predicted that Kenichi would get one heck of a trashing here, and while doing so Odin began to reveals what really happened all those years ago.

Which is really a silly thing, not that I hadn’t expected it already. I mean, the way Kenichi couldn’t remember anything about it and how Odin kept talking about but never really revealing what it is, I had already guessed long ago that it must be something really trivial.

Kenichi found new strength out of nowhere, putting him at the same level as a super buffed up Odin. It was cool and lame at the same time. The aftereffects of combining Dou and Sei Ki together finally started to show and Kenichi used the opportunity for his victory.

And the warehouse they’ve been fighting on finally caught on fire after so long, prompting the masters to come in to save the day. Before leaving with Odin, Ogata warned the Elder that Ryouzanpaku won’t stay as the strongest forever and that the darkness has begun to move. This possibly hints of a sequel in the anime.

For those interested in picking up the manga, I’ve heard that the ending of the anime is around volume 16. So if you want to continue where the anime left off, that’s where you should start.

Kenichi has been one of the best anime I’ve watched this year, and I am really glad that I was introduced to it early this year. Hoping for a second season soon and more actions from the masters themselves

Episode 1: The Season of Small Love

I’ve never watched the first Da Capo, nor am I familiar with the series in any way, but I did enjoy the first episode of Da Capo II. The character designs are so-so and the animation isn’t really anything to shout about, but it’s pretty interesting and there are already some mysterious buzzing in my mind.

Of course, this might not be the case for those who knows about the story already since they would probably know who the principal really is. I did a quick read-up and discovered that there’s magic involved in the series – getting even more interesting.

I’m especially curious about the stairs hidden in the principal’s office. 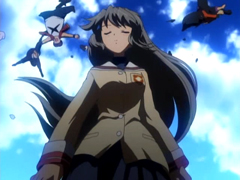 Although I’m rating this the same as Da Capo II, I actually like Da Capo II better after watching the first episode for both. The reason why Clannad gets the same rating is because Clannad’s character design and animation is a lot better than Da Capo II. But this is just my initial impression.

I’ve heard many good things about Clannad so I do have a high expectation on this series. One thing for sure though, me likes Tomoyo and her kicks XD

And for some weird reason, Tomoya reminds me of Kyon.