Posted by Neko Kyou in Weekly Review on September 30th, 2007

Episode 29 – 30: Blast Him into the Next Dimension! Naruto Shippuuden Special!

If you do not mind another 8 minutes or so of repeated scenes of Team Gai’s battle, as well as another few minutes of watching them as they watched their clones dissolve slooowwwly into whatever elements they were made from, you might find this episode to be rather good. By Shippuuden level, anyway…

The animation team loves to waste time by showing us things we don’t need to know, nor things we should care about. Like Sasori’s original puppet body being sealed to wall and his dead puppet body lying on the ground.

The first highlight of the 1 hour special is of course, Kakashi’s Mangekyou Sharingan. The effects weren’t as dramatic as Itachi’s Tsukuyomi. But even so, it’s probably the best most of us could hope for.

With Kakashi’s new ability, he managed to force Deidara to lower grounds where he got ambushed by Naruto and his kage bunshins. After so many episodes of chasing, he had finally retrieved Gaara.

But it wasn’t over yet as Naruto ambushed Deidara a second time, furiously turning Deidara into a punching bag. Naruto gave Deidara the Rasengan treatment, only to find that Deidara had performed Kawarimi and replaced his body with clay.

And here we have the second highlight of the 1 hour special. Naruto going Kyuubi mode. Even though I already knew what would happen and how Naruto would look like in Kyuubi mode, I couldn’t help myself to stop laughing when what appeared to be red coloured fart came out from his ass.

Other than Naruto’s lips transforming to one that eerily resembled the Kyuubi, it was pretty cool. Especially the tail, after it’s been fully formed and no longer look like fart gas.

Deidara watched the whole thing as Naruto Kyuubi mode wrecked destruction and even tried to attack Kaakshi. Kakashi managed to return Naruto to normal using a seal given to him by Jiraiya. When Deidara tried to retreat, he was greeted by Team Gay Gai thanks to Neji’s Byakugan. I swear Deidara is probably one of the very few who faced a Sharingan (a Mangekyou Sharingan at that) and Byakugan user while handicapped and still live for a long time. Oops.. Did I just say that? XD

Well, I suppose any battle where there are only one Team Gai is a good one. Although I can’t understand how they managed to defeat their clones one on one but couldn’t catch an Akatsuki who had no arms with only a single kunai in his mouth.

Deidara tried to take them all out ala Cell (Dragonball) by blowing himself up. Kakashi must have had the same idea as Goku and transported the exploding Deidara into another dimension. But unlike Goku, Kakashi didn’t have to sacrifice himself to do it. Therefore, Kakashi > Goku. (Nah, j/k… Maybe… Nah…)

Apparently Naruto still hasn’t given up hope on Gaara and tried to have Sakura to check up on him. But when Sakura couldn’t do anything to help, Naruto started to go emotional and tears began to flow out faster than water can flow out of a pipe. Despite that, it was a pretty emotional scene and even I shed a tear or two.

Chiyo looked very surprise when he saw Naruto in that state, which seemed to have toughen her own resolve to finish what she had set herself to do.

No new Naruto episodes until the 18th. Rescue Gaara’s arc would finally end and we’ll finally get to see Tobi and Yamato. If only Sai didn’t have to be part of the story.

Episode 48: Summit showdown! The man who carries the spear of legend 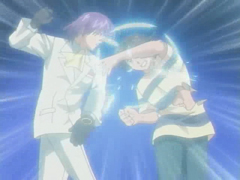 The final showdown finally began between the two leaders. As expected, the battle of the two Seikuuken were magnificent and graceful. Halfway during their fight, Odin ordered Ragnarok to crush the rest of Shinpaku Alliance so that Kenichi could no longer concentrate on his own fight.

Fortunately, Elder dropped off Siegfried in time to save Hermit from being hit by a hammer, and immediately after that the rest of the Shinpaku Alliance and Kisara’s team appeared to join the battle.

This allowed Kenichi to once again fight at full concentration, and he went back to the very basic, the evasion move first taught to him by Miu. With that, he was able to throw Odin to the ground and demanded that Odin remove his spectacles.

Odin asked Kenichi whether he truly wanted him to remove his specs, and when Kenichi continued to insist, he gladly obliged. Without his specs, Odin could no longer see properly, but instead, he gained a far more frightening ability. The true reason behind his title of Odin. The ability to read your opponents move to accurately dodge everything and land every hit.

Actually, the best part of the entire episode was really the next episode preview. It had me laughing so hard, I knew episode 49 would be a really good one. 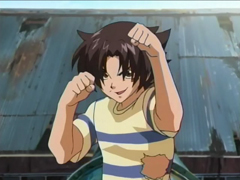 As I said before, I knew episode 49 would be a good one judging from the episode preview alone. I was not disappointed.

Odin’s ability of foresight and his Gungnir attacks which never misses its target proved to be way beyond Kenichi’s capability to attack or defend. He went on about how he was like before he met Ogata before continuing his assault. No matter what Kenichi tries to do ends up being useless.

Siegfried then revealed to Kenichi that Odin’s secret is that he had already memorized Kenichi’s rhythm. That was also the reason why Odin didn’t start off directly with this move. He had not caught Kenichi’s rhythm at the start of the fight. Sieg then told Kenichi to use his special thrust that he had used to defeat Sieg before.

After struggling a bit, he managed to get into the position and launched his deadly thrust. It probably would have knocked Odin out, if he hadn’t blocked in time. Kenichi continued to get beaten around until his body was shaking.

In a move that reminded me of Sakuragi Hanamichi (Slam Dunk), he knocked his head hard on the metal pipe he and Odin were fighting on to stop himself from shaking. The knock must have some real impact as he suddenly started to imitate each one of the Ryouzanpaku master’s moves. 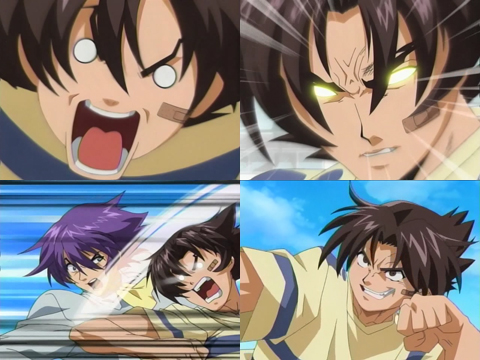 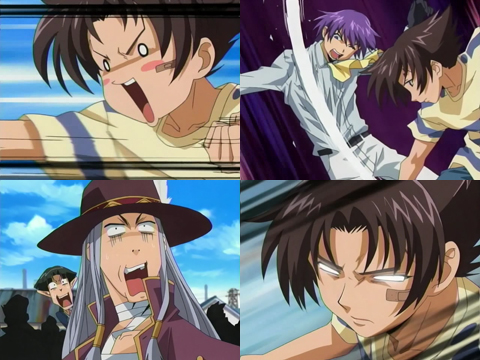 Elder looks so proud (for the wrong reasons…)

From Apachai to Sakaki to Kensei to Shigure to Akisame. It was so cool and hilarious at the same time, I fell on the floor rolling with laughter. Literally.

I seriously can’t see how Kenichi can top this, but seeing how Odin finally pulled out his trump card, Kenichi would need to find another strategy once more that is more effective than his mimicking his masters.

What does Shigure say about this episode? 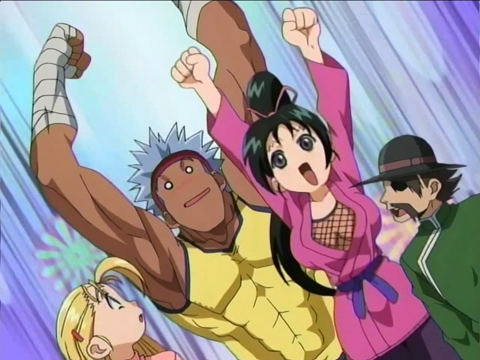