Mordred first appeared in Code Geass R2’s OP animation instantly reminded me one sumo-sized Gundam. The bulkiness, shape and most importantly weapon are pretty much identical. Mordred was a red version of Virtue. I won’t be surprised if there’s another Knightmare Frame hidden underneath those armor ala Nadleeh. 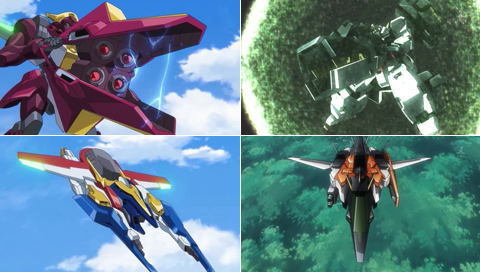 Can you plagiarize yourself?

Then came Tristan with its Fortress Mode. To be fair, there have been many other mech capable of transforming into an aircraft so the idea isn’t exactly new. However, thanks to Mordred looking a lot like Virtue, it’s only natural to compare Tristan with Kyrios.

But hey, it shouldn’t be much of a surprise that Sunrise have been recycling their mech designs, right? After all, the Gundam series have been going on for decades with many very similar looking mobile suits appearing over and over again. Take Gundam Seed Destiny, for example. Gouf’s made a comeback, the DOM trio also appeared and let’s not forget Hyaku Shiki Akatsuki.

If you’ve watched Gundam 00 and episode 7 of R2, you might notice someone familiar. So similar in fact, there’s a chance that they are the same person. If G00 and R2 were set in the same universe, you might think that G00 is set in the future of R2. But now, there is proof that G00 might have actually happened in the past of R2.

Shirin Bakhtiar left Marina Ismail’s side at the end of Gundam 00 season 1, and here in R2 we find out where she went after that. 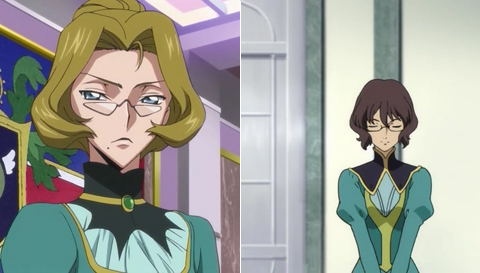 Shirin, more than 20 years after leaving Marina Ismail’s side…

Celestial Being must have somehow brought upon the rise of Britannia, and V.V. might have been a victim of their intervention (or a victim of Ali al-Saachez). Somehow he came with back the power of the gods and had Charles become his accomplice to take revenge on Celestial Being and eventually to overthrow even the gods.

You might be wondering whatever happened to the GN Drives and all those technology that was seen in G00 and that it doesn’t fit in with what we’re seeing in Code Geass. R2 seems to be taking a step backwards in term of technology, but that is not necessary true. The Avalon and the float system are superior to any single warship and flight technology available in Gundam 00.

As for why Gundam and the GN drives are no longer being used, don’t forget that no one actually knows how to build them outside Celestial Being. The GN-X drives were given to the various nations and they have not been able to reverse engineer them, so it’s possible that the solar furnace technology was lost.

Not to mention, given Charles memory altering Geass, he might have wiped out the world’s memory of Celestial Being, Gundam and MS’s for the purpose of his own world conquest. Another faction with Gundam going against him is the last thing he would want.

So Charles and V.V. took out Celestial Being, colonized Japan so that they wouldn’t suddenly produce even more Gundam, brainwashed the world and is having fun messing around with his kids while he continues to plot against the heavens.

3 Comments to “Britannian Empire the result of Celestial Being’s intervention?”