Posted by minerj in Naruto on February 2nd, 2008 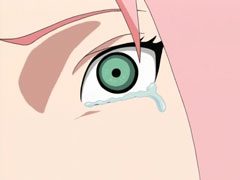 Urggh.. The title already make me feel bored. Unlike the previous episode, this episode is more about Sakuraâ€™s thoughts and reflection on Narutoâ€™s growth or change. Therefore, we get another dose of Naruto flashbacks. Yay! Not! Boooooo.. Despite being able to survive a lot of Jinchurikiâ€™s blows, Orohimaru can still put up a fight. I agree with what Kabuto is saying. It is not a fight between ninjas. It is a fight between monsters. Kabuto always have the chance to make fun of Naruto. Sakura is hurt by Kabubtoâ€™s words and runs to Jinchuriki in order to stop Naruto. Unfortunately, she is hurt by him. 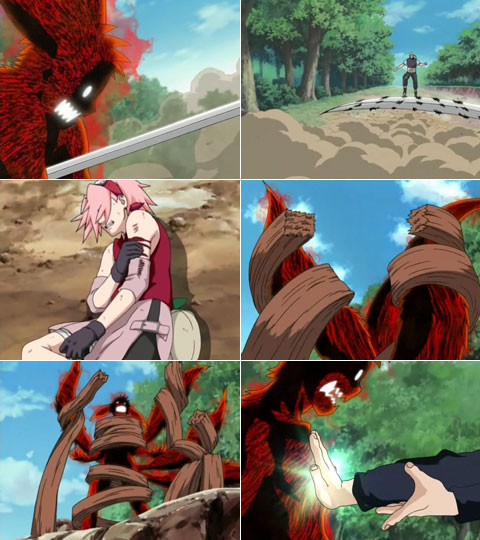 Orochimaru barfs out another version of Orochimaru. He really acts like a snake. He does it so effortlessly â€“ very similar to a snake getting rid of his skin. While he is busy deskinninghimselft, Sai takes the opportunity to meet him. Sai, however, is stab by Orochimaru.

Yamato quickly immobilize the Jinchuriki with his wood jutsu while Kabuto tries to heal the injured Sakura. Her injury is too deep that he can only do so much. After that he leaves her to assist Orochimaru. After Kabutoâ€™s departure, Yamato tries to undo the Jinchurikiâ€™s transformation. I have a feeling that Naruto is able to turn back to himself. 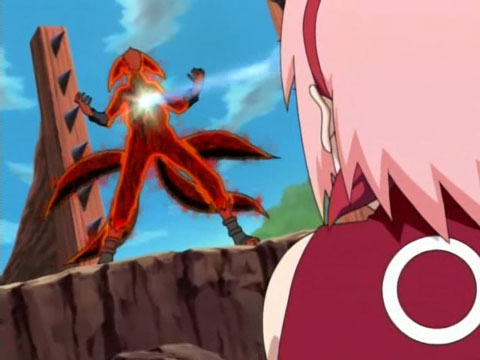