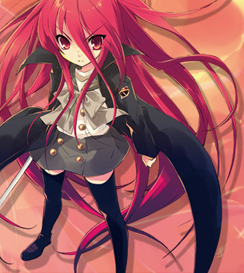 If you haven’t heard of Shakugan no Shana before, I strongly suggest that you check out asap. Originally a series of Japanese light novel, it has been adapted into a manga series, anime series as well as a PlayStation 2 and Nintendo DS game.

The story revolves around a female Flame Haze known simply as “Enpatsu Shakugan no Uchite” which roughly translates to “Hunter with Flaming Hair and Blazing Eyes” and is also recognized through her sword, the “Nietono no Shana” or Vairocana of the Offering Room.

While hunting a denizen of the Crimson Realm, she met with Sakai Yuji, who was the one that gave the Flame Haze a proper name, Shana.

Not much information is readily available about Shakugan no Shana Second, but we can probably guess that we’ll finally look more in-depth into the history of Margery Daw, her relation with Silver, as well as Silver’s real identity. For now, all we know is that Yuji plays an important role in this complex relationship.

The story, animation, character design, style, music and execution for the first season was top notched, and is definitely one of the anime many would be looking forward to come October this year.

3 Comments to “Shakugan no Shana Second”