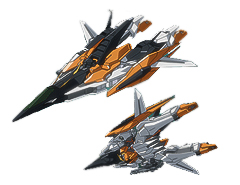 Gundam Kyrios can also morph into an aircraft (similar to Wing) in its Flying Mode. Kyrios is the tallest unit and seems to be the coolest Gundam so far in Gundam 00, but we’ll have to see its performance later on. Gundam Virtue kind of reminds me of a sumo wrestler with its bulky design.

Union Flag and AEU Enact are quite similar to each other, and resembles something that came out of Zone of Enders.

The 4 main characters are –

There are also a whole bunch of supporting cast, which by far looks more interesting compared to the main characters.