Posted by Neko Kyou in Clannad on December 8th, 2007 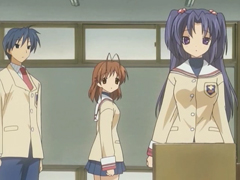 Have you ever wondered if Kyou really have a license to ride a bike around or does she just love to run over poor Tomoya? Now I do wonder which is deadlier, Kyou’s riding skills and deadly kicks combined or Tomoyo’s “Chun Li” combo kicks. Ahh… how I missed that. 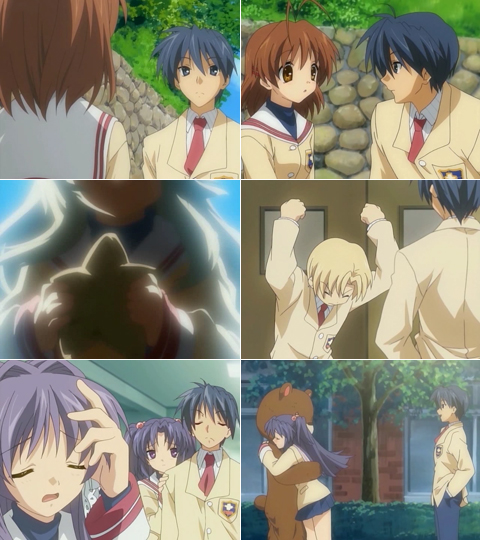 It’s good that memories of Fuko still lingers around in their minds which is quite obvious from Tomoya calling Nagisa by name. Maybe there’s still hope for her before the series comes to an end.

Nagisa and Kotomi makes the perfect comedy pair ROFL They even have the same affection for dango daikazouku. They seemed to actually understand each other’s one word lines that just drives Tomoya nuts.

I wonder which is more amazing, the fact that Nagisa (not so smart) and Kotomi (genius) could communicate so well or the fact that Tomoya is actually putting up with all of it. If I were Tomoya, I probably would have jumped off the roof by the time Kotomi did her 3rd “introduce yourself” gag on me. 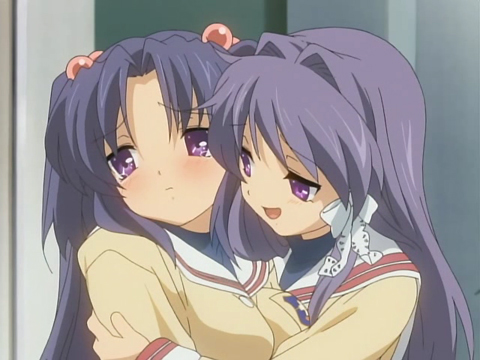 I don’t know about bullying, but this sure looks like sexual harassment to me…