Starting from the 1st until the 3rd of May, DaiCon Committees will be joining the EMiNA Cyber Roadshow held at One Utama Highstreet Haha no Hi event. Activities slated there include cosplay photoshoots, displays of Japanese Modern Visual Culture materials (manga, anime, magazines, figurines and many more) as well as free merchandise giveaways courtesy of Animax-Asia and ASTRO.But that’s not all! We’re also holding a sneak preview ticket sales for Miss Chihara Minori’s appearance in DaiCon. Don’t miss this special early bird sales at our roadshow!Â Tickets to be sold: AWSM Tickets = RM 250
– Specially numbered AWSM seats for Miss Chihara Minori’s Q&A Panel on Day 1 and Mini-Concert on Day 2
– ONE Autograph Pass for Miss Chihara Minori’s Autograph Session.

Holy shit! RM250 to get a chance for her autograph!

Considering such a rare chance, RM250 is quite worth it. But I’m already stretching my budget really thin to get there, so hopefully I’ll be able to scrap up enough cash for it.

I want that autograph!

DaiCon is also taking pre-orders for Johnny merchandise at 56th_avenue@LiveJournal by May 10th. You can get your hands on that poster/calendar/magazine of Kat-Tun/NEWS/Arashi you’ve always wanted and collect them during DaiCon itself.

There will also be some of the merchandise being sold at the event, but if you really want something, you should pre-order or else you might miss out on the chance.

OMG! Chihara Minori is coming to Malaysia!!! And she’ll be performing live!

I only found out about this a couple of days ago and have been so excited ever since.

She will be attending DaiCon being held at Multimedia University, Cyberjaya on the 11th and 12th of July. She also left a special video message for those attending, which can be viewed here.

Because I’m living in East Malaysia, I would need to go over to KL by air. Now there are only about 5 seiyuus around that would make me catch a plane all the way there and back, and Chihara Minori is one of them.

Luckily, air fare is very affordable if I booked now, so excuse me while I go do all my bookings for the trip in July 😉 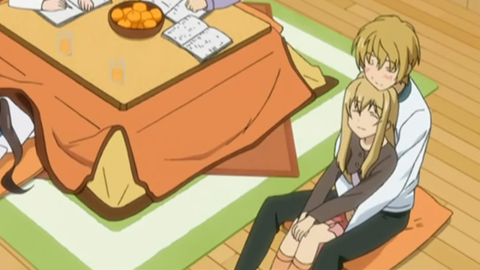 Look at that. He looks like he’s enjoying it more than Chiaki-sama. Look at where his hands are! What are they doing down there??

And he’s not satisfied with just Chiaki-sama… 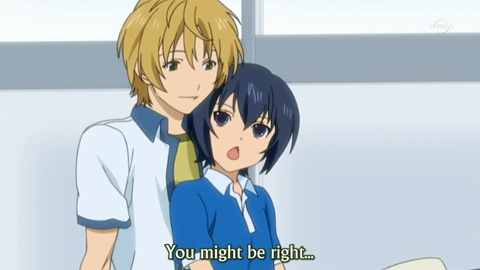 He’s even doing it with Touma!

And mind you, Fujioka thinks Touma is a BOY!

I really want to be in his position right now…

A new season has arrived. As usual there are a lot of shows and even more bad ones. There are still a few shows I’m trying to catch like Hatsukoi Limited, 07 Ghost and Eden of the East. But the season is starting out better than I thought, and here are 8 shows that are standing out so far.

Kugimiya Rie is busy again as usual this season with 3 very different roles:Â  the rich loli Nagi, the living armor Al and the mahjong player equipped with a fang, Yuuki. 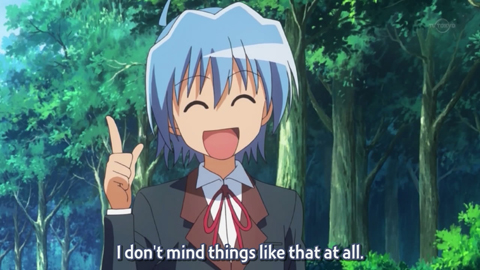 Still as brilliant as ever, although I do wonder about some of the color changes. But it doesn’t really bother me that much since the main cast were not touched. Gotta love the summary of the first season at the start – short and sweet. Was disappointed that the OP wasn’t done by Kotoko

Unless I’ve been dreaming during season 1 (or I just totally forgot about it), there appeared to be a short skip in the story involving Nagi and Ayumu’s younger brother. Guess that means I’ll have to read the manga to find out what really happene. 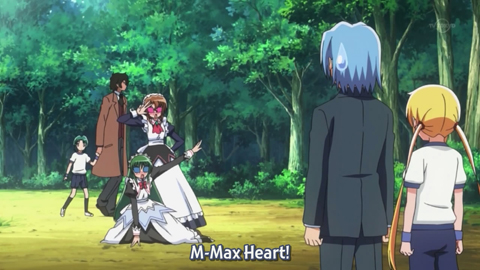 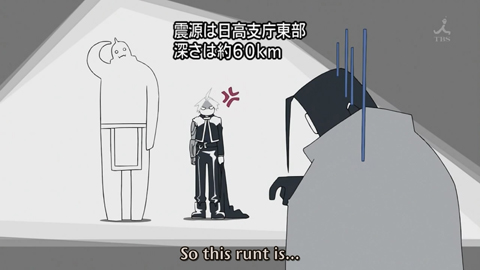 Unlike most who thinks FMA is one of the best anime/manga around, I didn’t think it was that good. Don’t get me wrong, FMA is good, but to me it wasn’t up to the level many others hailed it as.

One of the things I liked about FMA was the great supporter of mini skirts for uniform Roy Mustang. Having the surprisingly perverted colonel come out as if he could shout “nerai wa utsu!” at anytime dampens that. It will take some time to adjust to the new Lockon Colonel Mustang.

But as long as it’s not going down the exact same route the original series did, FMA Brotherhood will be an interesting watch. I don’t really like waiting week after week to watch a “rerun” when we can just rewatch the original series from start to finish in a couple of days. 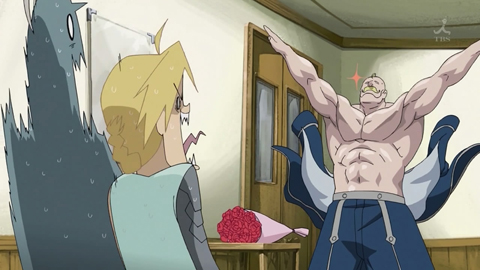 Salutes to Kenji Utsumi for still being able to pull off an awesome Major Armstrong at nearly the age of 72, one of the oldest seiyuus around today.

Apparently, FMA Brotherhood will be showing on Animax Asia very soon as well. 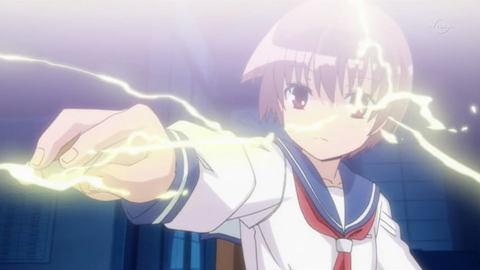 It’s like a dream come true. I had really enjoyed xxxHolic’s mahjong episode and it was then I found out about Saki. However, the manga was difficult to find and I only managed to get a few chapters of it, which discouraged me from reading. So when Saki was announced to make its debut as an anime this season, it easily became one of the series I looked forward to most.

And I love it! I play mahjong for fun every now and then with a few friends, and it’s always a barrel of laughter. The kind of things you do just to screw up a single opponent even if it meant losing the round, it’s all good fun – if you consider this twisted kind of fun as good like me.

Unless Gonzo somehow screws this up really bad, I will enjoy this very much. 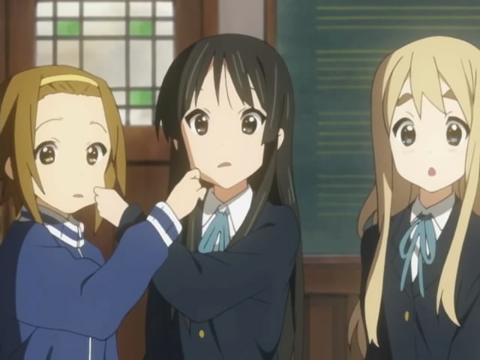 The first 10 minutes or so was kinda boring – my first impressions of Konata’s chocolate cornet was loads more entertaining. The real fun only began after Yui stepped into the club room.

Maybe my expectations were too high after reading and hearing good things about K-ON, but I was slightly disappointed after watching it. Animation is pretty fluid as expected from KyoAni, but I’m sure they could have done a lot better especially the colours. 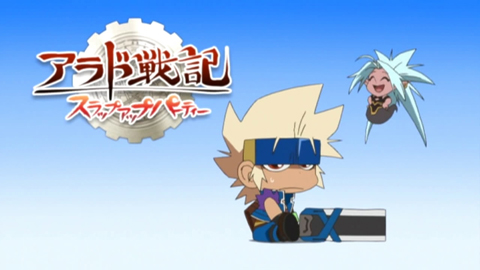 I like spirit Roxy. She’s just so cute and adorable, a lot different compared to when she was a demon knight. It looks interesting enough, but at the same time it feels like a ticking timebomb waiting to blow up and go very wrong. 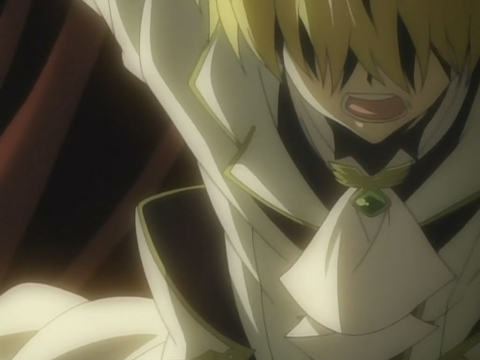 I’m curious about this series. Like how Pandora was curious enough to ignore Zeus’s warning and opened the jar to unleash evil and misery to the world, I find myself attracted to what evil and misery Pandora Hearts will unleash. 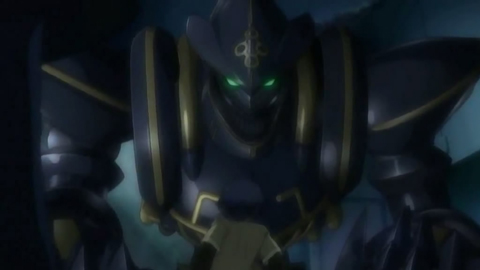 If the first episode is anything to go by, the original summary that this series is about a boy and a ghost girl doesn’t do any justice to it. Secret societies, religious wars, scientific experiments, a mecha hidden in wormhole stuffed inside a small metal casing -Asura Cryin’ might actually end up as one of the best this season. 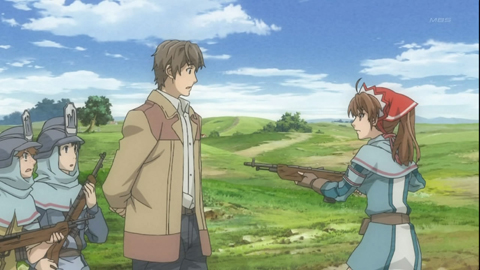 I haven’t played the game (yet) but something tells me I’ll be playing it sooner than I thought. The animation style kinda resembles a painting, especially the shading. You can easily tell it looks different from other shows but personally I think it looks pretty good. One of the most impressive looking series that came this season with a cast of likable characters. I think I have the hots for Alicia already <3