Posted by Neko Kyou in Weekly Review on August 5th, 2007

While I wasn’t completely satisfied with this, especially it being a one hour special, it is possibly the best episode so far for Shippuuden. Finally, some real action instead of watching 2 kunoichi dancing around a cave. The battle between the 2 elite puppet masters were so intense that whatever Kankuro had thrown out thus far in the series suddenly felt like child’s play. The awesome background music added to the overall excitement of the battles. Unfortunately, the total battle scene only lasts about 10 minutes.

There is also a bit more into Sasori’s history including filler scenes that was not present in the manga. It just hit me right now that Kakashi’s father, the White Fang, was probably the one who killed Sasori’s parents. Kind of weird that Sasori did not give any reaction upon seeing Kakashi in the first place. But then, maybe he just didn’t know, although I highly doubt that.

This 1 hour special could have actually been compressed into a single episode, if all the useless filler scenes that serves no purpose other to drag the minutes on to stretch it across 2 episodes.

Episode 41: The Terror of Seikuuken! The Dragon has Landed! 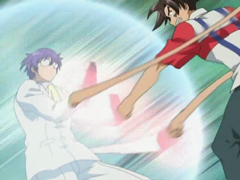 The first half of this episode continues where it left off last week, with Odin challenging Kenichi to a match whom he easily overpowered and win with his Seikuuken. I had suspected that their vow would be the winner would get Miu’s badge and consequently, Miu’s heart. Although that hasn’t exactly been confirmed, it does seem that way even more now. The second half the episode focuses on Nijima and the Shinpaku alliance. I was literally in tears after this part, although I still can’t figure out whether they are tears from laughing because it’s too funny or too pathetic. You tell me which is it…

Tsukasa got a new cellphone and Kagami is going nuts watching her twin playing with it. Cousin Yui goes over to Konata’s for a visit and Miyuki took a trip to the clinic for her cold but being her usual dazed self, she missed not only her turn to see the doctor, but her stop at the bus as well. Kagami and Tsukasa also ended up at Konata’s place for a sleepover. Kagami and Tsukasa switched hairstyles after bath, which really confused the heck out o me for a few seconds there…

Did you notice? There’s a Mikuru figure in Konata’s room and a poster of the female cast of Suzumiya Haruhi in bunny outfits… and Minoru’s movement as he explained about tsundere is exactly the same same as Koizumi’s action while taking to Nagato in Suzumiya Haruhi’s Adventures of Mikuru.

Episode 11: The Many Ways to Spend Christmas Eve

Seems like Christmas is approaching and the girls were discussing about how they sometimes misses their stop because they fell asleep in the train. Kagami admitted that she felt like she had to work harder because it’s her pride as the older sister replied that Tsukasa wasn’t much of a competition in the first place. And the hard truth finally hit Konata when Tsukasa asked her when did she stopped believing in Santa. When Christmas eve finally arrived Konata was surprised to find Kuroi-sensei online and decided to spend the night with her playing MMO.

It’s New Year’s eve this time and Konata tries to trick everyone into following her to the Comic Market convention. In the end she managed to get Kagami and Tsukasa to the Comic Market being held at Tokyo Big Sight, Odaiba. After sharing with them her war plan, Konata sets off on a spending spree all over the building. In the evening, Konata and her father went to visit the shrine where Kagami and Tsukasa were performing Miko duties. As usual, Konata finds it surprising to see Kuroi-sensei online and cries for her part.

There’s so many things to notice at the Comic Market –

Yet another food topic, this time it’s about traditional food that you usually eat at New Years. Somehow, Konata have very western ideas of what makes traditioanl New Year food. Out of the blue it’s already Valentines. Konata receives chocolates from Tsukasa and Kagami and Konata had a vision of a Kagami going all tsundere while giving chocolates to a guy. The Anime store seem to finally managed to get Konata to buy something from them… if only she had 3 yen more…

Did you notice… A Mikuru figure on top of Konata’s TV set, and the DVD Konata picked up was The Melancholy of Suzumiya Haruhi. There’s also a very short Yu-Gi-Oh parody and I’m pretty sure the tenchou was using “Sharingan” to get Konata to buy the DVD.

Episode 14: Under One Roof

Yutaka moves in with Konata since she’ll be going to the same school. She’s only a year younger than Konata but compared to her, even Konata looks much older. Konata remarked that with Yutaka’s moe-ness, it would be chaotic if she were put next to Miyuki. Cousin Yui invited the group to go drink despite them being underage and her being a police. Hmm…

Konata had the gang in line to try their luck to win tickets to The Jam of Suzumiya Haruhi (which is, by the way, a real event. Click on the link to grab the DVD) concert and luckily for her, both Tsukasa and Miyuki managed to win them. She became touched when Kagami switched place with her during the concert so she could avoid the large man in front of her and watch the show. It’s April Fool’s day and Konata pulls a joke on Kagami that she did her homework, and was later on played the fool by Kuroi-sensei.

Did you notice… During the concert, the Haruhi in bunny gal outfit cosplay was singing “God Knows” that Haruhi/Hirano Aya sang during the school festival in The Melancholy of Suzumiya Haruhi.

Is it just me or was the Hiiragi family watching “Who Wants to be a Millionaire”? 😀

Suzumiya Haruhi ALERT! This has got to be my favourite episode so far. Kagami suggested that they visit Konata at work, thinking that would freak Konata out, but to her disappointment Konata encouraged the idea.

When they arrived, they were greeted by one Suzumiya Haruhi cosplayed by none other than Konata. Kagami saw cosplays of Kyon and Nagato (voiced by the actual seiyuus) before getting interrupted by Konata with Hirano Aya in Haruhi mode. It was fun to see Hirano Aya switch back and forth between Konata mode and Haruhi mode. Then it happened… They did the Hare Hare Yukai on stage…

The band went over to room 707 and waited for Hachi, who decided to go over to Jackson’s for a burger and met Shouji there. They sat together and talked about the past and its obvious that they both regretted their breakup. But they’ve made their choices and so they have to live on with it, each on their own path. At the same time, Takumi revealed to Reira that he agreed to let Ren marry Nana. This episode was totally different from what I had thought, but nothing could have prepared me for the final episode…

I seriously don’t know what to say, it’s totally different from the many scenarios I had thought up all the way since I first watched the live action movie. I had half expected to see a ending similar to Paradise Kiss, but I was totally wrong. Well, I might still be right, since the way the final episode ended leaves room for continuation of the story.

The episode started off a scene from the future, presumable around 7 years later, where Hachi and her daughter, now 6, was meeting up with the rest of Blast in room 707 for an annual reunion to watch the fireworks. All Blast members seemed present, except for Nana. It seems that the only person who changed is Shin, who has become much taller than Nobu and dyed his hair a light blond. 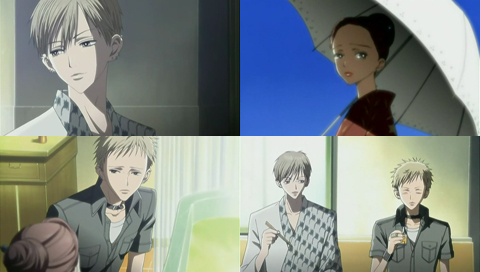 Going back in time to room 707, where the previous episode had left off, Nana taunts Nobu into getting Hachi back, but he backed out at the last moment, revealing that Nana did not get back together with Nobu. The scene then shifts back to the future, where Nobu presents Satsuki (what happened with Sachiko?) a doll as a present. Nana, as the end of the episode suggested, went missing and was never seen again, although it was mentioned that Ren was still around and would join the reunion in room 707…