Been a pretty hectic week with assignments on due soon, and I expect next week to be the same too 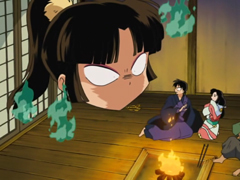 As the episode title suggests, this episode revolves around Miroku and his relationship (or lack of) with Sango. They stumbled upon a village that Miroku once came across a few years ago and just as luck (good and bad) would have it, there’s actually a girl who Miroku had as usual proposed to back then who had been waiting for his return after he had saved her life. It just so happens that the demon of the lake is trying to have the girl’s hand in marriage, but the person who she really wants to marry is Miroku. Sango went into her usual cold mode which pretty much freaked Miroku every so often. 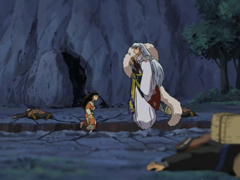 A nice little episode about Rin and how she wishes to stay with Sesshomaru forever. As expected, any episodes with Sesshomaru kicking either bad guys or good guys around is good in my books

Inuyasha and co. did not really get to do much in this episode and the plot is putting the blame on the new full moon (when Inuyasha turns human during the night) for it. 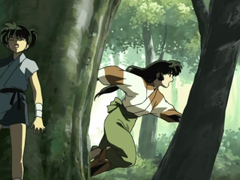 A bitter-sweet episode where Kohaku and Kirara recalls the past before Naraku as they wondered through familiar places near their old homes. More in-depth look at the demon hunters lives, particularly between Kohaku and Sango. As Kirara reminisce the past, a bunch of demons attacked but with Kohaku’s helped, they managed to defeat the demons easily.

Towards the end, Sango appeared searching for Kirara and realized the Kohaku was nearby when she saw Kagura and tried to search for him. Kohaku, of course, could not show himself since he still hasn’t completed his mission to finish off Naraku. Kirara, being the only one who knows the truth, brought Sango to the place where Kohaku had said he that he wished for Sango to see.

Episode 36: Miu vs. Renka! The Triangle that Calls up a Storm 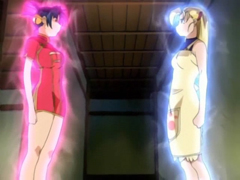 Nothing spectacular in this episode, but as usual it’s still full of fun and laughter, especially when the whole group went to the pool for relaxation. Ma Kensei’s daughter, Ma Renka, came by Ryouzanpaku to bring not only her father back to China, but Kenichi as well! A rivalry sparked off between Miu and Renka, but in the end Miu just began treating Renka as a cat.