Posted by Neko Kyou in Weekly Review on August 12th, 2007 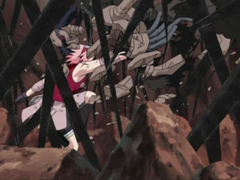 I think I have just wasted 20 minutes of my life watching this episode. First we have a few minutes of Sakura showing off which is from the previous episode, then we have Naruto and Kakashi wasting even more time chasing Deidara again, and yet even more time of the deadlock battle between Team Gai and their clones, with absolutely nothing new. Even the opening and ending animation that featured clips from the new Naruto Shippuuden movie was much more entertaining than the entire episode itself.

When we finally get back to Sakura and Chiyo vs Sasori, we’re treated to the same scene two times in a row. Honestly, this whole episode can be completed in under 5-10 minutes. Sakura’s dodging skills, Sandaime Kazakage’s Saitetsu Kaiho, and Sakura breaking the Kazekage into a million pieces.

Why they have to keep wasting and dragging more time is well beyond me. It’s really starting to piss me off that they’re still adding more fillers in when they should have enough material to last for at least another year or two even they even come close to where the manga is it at now. 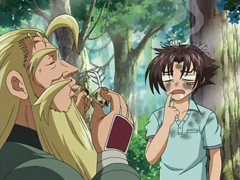 Kenichi goes to train with the Elder and from the looks of Akisame’s reaction, it might not be something which Kenichi should be looking forward to. Sure enough, the Elder does seem to have something up his sleeve, but exactly what, we’re not so sure yet. After some persuasion, Akisame finally spilled the beans about how this journey with the Elder would change Kenichi for either the better or worse.

The comedic highlight of this episode is once again by the Shinpaku alliance group, who has gone to convince Kisara for an alliance. I’m beginning to think that Sieg might actually be more cunning and persuasive than Nijima.

Episode 17: Under the Sun

It’s Konata’s birthday and her family was going to throw a surprise party for her. Predictably, however, she ended up partying with her friends at work. Then we get a look behind the life of Kagami and her sisters. It seems that she’s only close to Tsukasa and often gets into arguments with Matsuri, one of her older sister. It’s interesting for sure, but it was kind of boring at the same time. There just isn’t any Lucky Star comedic effect there.

The Lucky Channel this time was quite entertaining, with the Anime Tenchou making a guest appearance and taking over the set, leaving Akira disgruntled. And Shiraishi Minoru ended the show with his own version of Lucky Star’s opening theme, Motteke! Sailor Fuku.

Episode 18: To Each Her Own

I like how Konata relates everyone to animals and starts to imagine how they would look like. Definitely moe! The FMP parody between Konata and Kuroi-sensei was just too much fun as well. The focus on the 2nd part of the episode switches to Yutaka and friends. They appear to be another whacky branch as well. Iwasaki always seemed concerned about her “flat-chestedness” (I know I made word up) and Patricia thinks that popular shopping places are Japan’s sacred places. Hiyori also have this habit of drawing Yutaka and Iwasaki in “perverted” manners.