Last week I said that I have a feeling this week’s list would be longer. I’ve added Lucky Star to my watch-list this week and while struggling to complete my assignment I’ve managed to watch 15 episodes so far. However, for this week I’ll only do the review up to episode 9 to prevent this from becoming way too long. 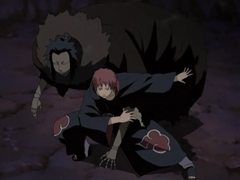 Sasori finally showed his face… and that’s pretty much it. Pretty boring episode, quite a waste of time really. Next episode seems to be an one hour special, maybe something we’ll finally get to see some real action. Maybe…

Episode 40: The Promised Land! Everything Starts From Here! 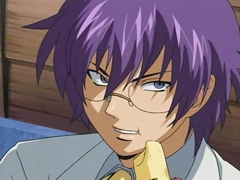 Odin is revealed to be Asamiya Ryuto, an old friend of Kenichi. Kenichi, Miu and Ryuto met in front of a candy store many years ago and it is there that they exchanged the badges they carry. A good break from the fights we’ve had for the past few episodes, and a prelude to big battle to come.

Episode 15: A Shape of Things to Come. Kurogane Gym! Hyouta vs Shinji! 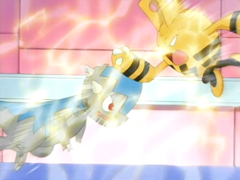 Shinji took on Hyouta of the Kurogane Gym in a 3 vs 3 battle. I seriously wonder what a gym leader is doing with a Ishitsubute (Geodude) at this point of the anime. But the Zugaidos (Cranidos) and Iwark (Onix) put on a pretty good battle against Elekid and Hikozaru (Chimchar). Not a bad battle, but its either Hyouta was going easy on Shinji or Shinji had not given a chance for Hyouta’s Pokemon to perform more powerful moves. I think its the former…

Episode 16: A Gruff Act to Follow. Cranidos vs Pikachu! 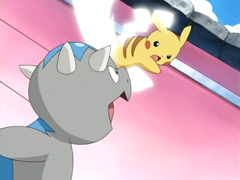 This time it’s Satoshi’s turn to battle the gym leader of Kurogane City, but it seems like Hyouta’s Pokemon have leveled up a bit since his battle with Shinji. Why do I say this? Because they were much stronger and faster, performing more powerful moves than they did against Shinji. Satoshi’s first gym battle in Sinnoh and he screwed it up. Great.

Episode 17: Big Charge of Ancient Pokemon! Wild in the Streets 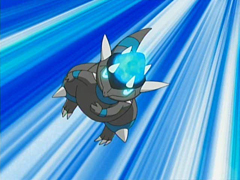 Team Rocket managed to capture and unleashed a Ptera (Aerodactyl) that begins to attack Kurogane City. Armaldo and Kabutops also broke free from the fossil museum and Satoshi and co. along with Hyouta have to try and stop them, putting them back where they belong. Zugaidos (Cranidos) evolved into Rampard (Rampardos) during the battle, and I’m beginning to wonder how Satoshi could win a Rampard when he can’t even do off with a Zugaidos…

So close to the ending, the nonchalant atmosphere seems to be the calm before the storm. After a long separation, it seems that Hachi will finally reunite with Blast members… but somehow I don’t think things will go exactly as planned…

Crap… Konata reminds me so much of me and my own friends it’s creepy… The pure randomness of the anime is strangely similar to what we go through daily as well… After the first episode, I told myself that I think I’m going to like this better than Azumanga Daioh.

Gosh… It’s almost like looking at myself in the mirror. Spending the entire holiday on an MMORPG and last minute studies for tests. But Konata pulled it off better than I did *sighs* I’m definitely liking Lucky Star.

Did you notice the Galaxy Angel on the magazine Konata was reading and the Hare Hare no Yukai on the Taiko Master in the arcade?

Episode 3: All Kinds of People

If you’ve ever wanted to win a prize in any post-in prize drawings, you gotta watch this episode and learn from Konata 😀 Plenty of good advices from here in this episode. And after wondering for a couple of episodes on how Kagami and Tsukasa can be in the same year despite being sisters I finally realized they were twins… hmm…

Yikes. The similiarities I have with Konata can be getting disturbing… Leaving textbooks behind in school and all… It’s cool to have a teacher who plays online games with you, but it’s also a dangerous thing it seems as Konata’s case has proven, especially when you’re both in the same party.

Did you notice… Suzumiya Haruhi’s armband and To Heart school uniform. Not to mention the part when Konata was late for the 2nd time, she was describing a scenario from Kanon when Yuuichi first met Ayu. Uguu~ And Konata gave another excuse from Shuffle’s Mayumi regarding people with flat chests. There’s also a Mayumi poster in Konata’s room. Also an obvious reference to Shin-chan during the cake scene.

It’s summer time, that means… Festivals and Yukata! Obvious reference to Pokemon as Kagami caught a goldfish. Is it just me or is Orochimaru’s voice all over the place as miscellaneous characters… And it’s weird how people loves to hum into the fan isn’t it. Lucky Star sure brings out the weirdest habits that many people have…

Did you notice… Saber and Archer on the magazine cover! Konata was humming the tune from Suzumiya Haruhi’s Bouken Desho Desho while playing her MMO. And Yui was wearing a Bonta-kun mask during the festival.

A great Initial D episode… Uhm.. wait, that’s not right. I meant a great Lucky Star episode with the gang going off to the beach for some fun along with Nanako and Yui. Plenty of “girl-talk” and I didn’t manage to catch all the jokes here

And what the heck is “Timotei, Timotei”?!?! I’m just guessing it’s a shampoo advertisement in Japan.

Did you notice… The song played during the Initial D scene was by Noisy Tribe, the same group that did the opening songs for Initial D 4th Stage. The Full Metal Panic Fumoffu reference with the watermelon?

A lady-like Konata is just so… wrong. But it’s also very entertaining to see the responses she gets while acting that way rofl. The way she speaks kind of reminds me of some other anime, but I can’t seem to put my finger on it.

Did you notice… Kagami mentioned that a new volume of FMP is out!

Episode 8: Don’t Need Me to Have a Blast

Again, while it’s cool to have a teacher who plays the same MMO as you do, it can be a bad thing as well… You’ll get lectured even during in-game about your homework and stuff. I never really noticed how short Konata really was until now as she stands right next to Kagami and Tsukasa without being noticed. I wish there was an all you can eat cake buffet here

Did you notice… Koi no Mikuru Densetsu (Adventures of Mikuru from Suzumiya Haruhi) and Akira even did the Mikuru beam pose. There’s also a Super Mario Bros reference during the conversation in the next episode preview.

Episode 25: Path to Becoming a Lady 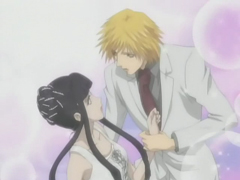 Finally get to watch the ending for Yamato Nadeshiko Shichi Henge. Sunako finally met face to face with her aunt after staying in the mansion for so long and tries to turn her into a proper housewife while her aunt tries to turn Sunako into a proper lady. Sunako aunt’s idea of a housewife is interesting to say the least. The best part of this episode is probably the middle and the ending, where Sunako gives it her all to become a proper lady, putting on a beautiful white dress to meet her aunt at the ball. Pretty decent ending, but nothing that’s really funny in this finale.