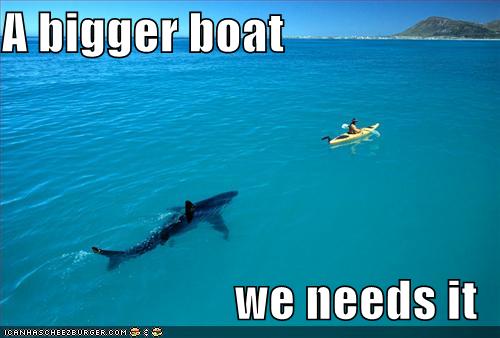 You can blame the lack of updates on those dumb predators of the sea. They’ve killed my connection speed once again.

My Internet connection has been so terrible lately, it’s taken me nearly 12 hours just to get this post done. The above image took me about 10 minutes to download and another 15-20 to upload. Not to mention the hours it took to even get to the writing page on WordPress’s dashboard.

It’s a joke which started when the underwater cable in the South China Sea connecting most of South East Asia’s Internet cables to Taiwan, which acted as our central hub to the rest of the world around early 2005. Connection was pretty much non-existent and even Google takes forever to load. The cause was an earthquake which damaged the undersea cable and a few other backbone cables in Taiwan.

The frustrations grew as the situation got worse and it was expected to take months to fully repair the cables so me and Dyna started to blame them sharks for taking a bite out of the cables, despite the fact that there are no sharks in the South China Sea. At least to my knowledge, anyway. Not like I can do a Google search and check it right now. It would take another 3-4 hours to do that right now.

My MSN keeps bouncing messages, ICQ keeps disconnecting and Skype messages keeps getting delayed. The only thing that seems to work right now is Gmail Chat, as long as I don’t refresh the page, that is.

So, damn those sharks!

I need to go find myself some shark fins. Vengeance will be so delicious.

3 Comments to “Damn those sharks…”