Return of Roy Mustang? Librarians are licensed to kill! 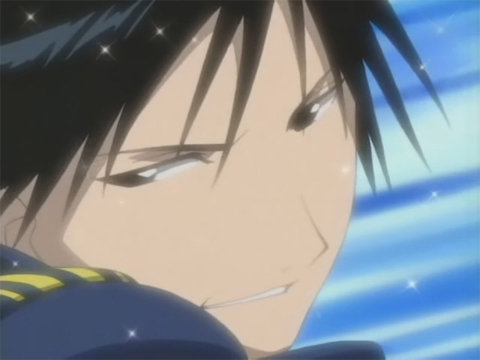 “My dream is to make all female personnel wear mini-skirts!”

No there’s no new FMA specials on Mustang, but Atsushi Dojo have been reminding me of the flame alchemist since the very beginning. Maybe it’s because Dojo’s facial expression and position are similar to Mustang, but I’ll admit that was reason which initially got my interest in Toshokan Sensou.

Like Mustang, Dojo also apparently had a “foolish youth” period based on what he thought to himself in episode 5. I’m guessing something must have happened to him which turned him into this short demonic instructor. All Dojo needs now is to develop an annoying personality and become a womanizer. 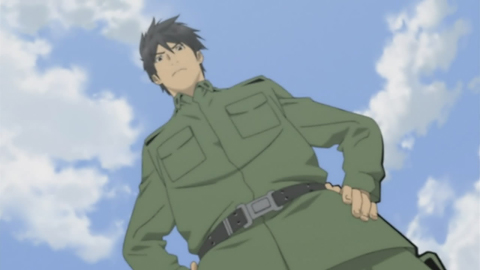 The idea of a library task force taking arms against government censorship sounded kinda cool, yet silly at the same time. I mean, honestly, librarians as a military force? The most exciting thing to happen during my 2 years as a librarian in high school was discovering the mysterious door hidden away all the way at the back of library, behind the thick, cobweb covered reference book actually leads to a rarely used meeting room.

It also leaves a lot of questions on the table, such as if the Media Cleansing Committee was created by the government, while the library task force is a private organisation, why would the government allow the task force to push them around especially if they were so bent on censorship and even willing to kill to achieve it? Even if they have the Intellectual Freedom Statement, it doesn’t mean the government would give a damn. I believe most governments wouldn’t.

Even more interestingly is how they actually take up arms against each other as if they are sworn enemies in war, yet outside these library conflicts they still live and go about their lives together casually.

Maybe I’m missing some critical parts of the story, since the anime is adapted from a novel series which I’ve not heard before until now. What I do know is that currently there are a lot of holes in the plot which could use some explaining, such as what exactly is the government trying to hide from the public.

Even if they do manage to control information on printed materials and books (and from the looks of it, children’s book are no exception), there are plenty of other, more efficient ways for information to spread. Such as the Internet. China tried to regulate what their citizens can see on the Internet, but I would still say if they really want to, even those in China can easily get information their government is trying to keep away from them. 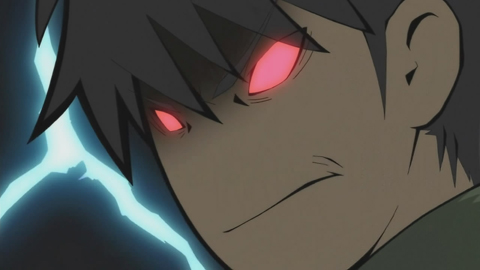 Don’t you just wish he does this face more often?

Putting that aside, Toshokan Sensou is pretty entertaining. For what reason I still can’t really pinpoint other than I enjoyed watching the 2nd coming of Colonel Roy Mustang. So far there hasn’t been any specific moment in the anime worth mentioning. The military strategy is nothing to be shouting about, especially since we’ve been shown the brilliance of one Sergei Smirnov.

4 Comments to “Return of Roy Mustang? Librarians are licensed to kill!”