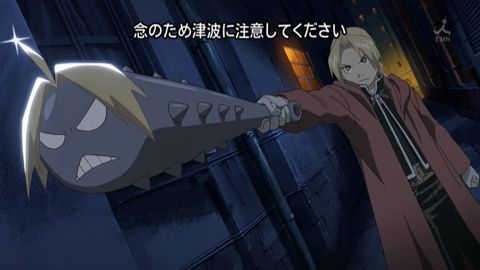 The original Full Metal Alchemist anime was good. But I didn’t quite like it all that much. The main attraction was definitely Mustang and his love for mini skirts.

When the first episode of Brotherhood came out, I was disappointed that Mustang was now Lockon. Took a while to get used to, but I still strongly prefer the original. The new voice just doesn’t have that sarcastic feeling anymore.

But after 8 episodes, I find that I’m enjoying Brotherhood a lot more than I did the first time. Brotherhood goes straight to the point instead of dilly-dallying around and letting the solemn atmosphere sink in deeper than the South China Sea.

The first FMA was way too gloomy and I hated that. Some liked it for that, but not me.

The only reason I continued watching was because the story was quite interesting, and with majority of the people around saying that FMA is a must watch, that probably helped me finished the entire series – except the movie.

With Brotherhood, I find myself somewhat looking forward to the next episode. While the main plot remains, the execution is different, although I admit that my memories of the original plot is rather hazy.

I had my doubts at first, but Brotherhood will be a lot more enjoyable, for me at least. One way they can improve it even better is by killing the voice-over during the mid break.

If you liked this article, please consider subscribing to my RSS feed. Don't know what an RSS feed is? Click here.
15 Comments