Have You Voted in the Anime Blog Awards? 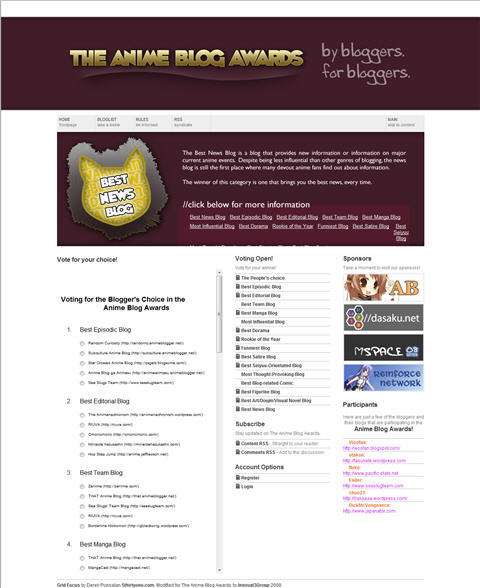 Voting closes on the 14th this month, that’s barely 3 days away from now. I don’t think you can actually see the results of the People’s Choice until it’s announced, but you can check out the Blogger’s Choice current results by viewing each of the different categories individually.

Anyone can vote in the People’s Choice Award, but you have to be a registered blogger to vote for the Blogger’s Choice. So be a part of history in the making and start voting! 😀

Just a quick reminder, there’s only 4 days left before the nomination for the Anime Blog Awards is closed off and voting begins. Nominations can be made by anyone, as long as you run an anime blog that was created before February this year and have been maintaining it or at least made a few post since March.

For the rest of you, start preparing your votes because it will be your turn to decide who wins the awards once voting starts on the 25th of this month!

The banners to help promote the Anime Blog Awards is finally out. A bit late IMO, but nonetheless, let’s start putting them up all over the anime blogosphere 😀 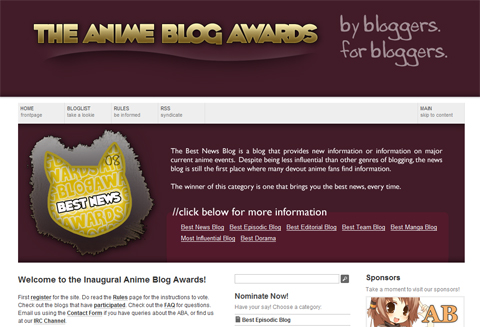 There has been some issues raised over the conception of the awards, most of which has already been directly addressed by Impz, one of the award organizers.

To my knowledge, this has been the first time an award to recognize anime bloggers of this scale has been attempted, one that will provide strong recognitions to those who are nominated. The organizers are some of the most well known bloggers amongst those in the anime community after all. If they can’t achieve what they set out to do, it would be difficult for any others to do the same.

One of my greatest concern was that, regardless of how the organizers attempt to be fair, nominations and votes would inevitably go out to the more popular and well established blogs and bloggers. Not to mention that the awards would get very little recognition and promotion outside this circle of the anime blogosphere. That would have defeated the first and possibly third purpose of the awards in the first place. Fortunately, Impz managed to come up with a satisfactory response to this, while at the same time showed that he is trying his best to get the word out to the rest of the anime community.

Right now, there are still so many other blogs out there who aren’t aware of this effort at all. That is a real pity, which is why it would be a great idea if everyone could help spread the word out to help make the awards a huge success. Even for non-bloggers, this would be a great opportunity to check out new blogs which you might not have been aware of before.

Despite the tagline being “by bloggers, for bloggers“, in my opinion this is really for all anime fans. While it’s true that the greatest benefits goes out to those who were nominated, but half the fun belongs to the more casual of fans, those who do not blog but lurks around within the blogosphere.

There are more readers then there are bloggers, so ultimately you have the greatest influence to determine the winners, especially within the Readers’ Choice awards. Even within the Bloggers’ Choice, chances are those who have the greatest following among readers would end up in the spot light, which can also be argued as a good thing or not 😉 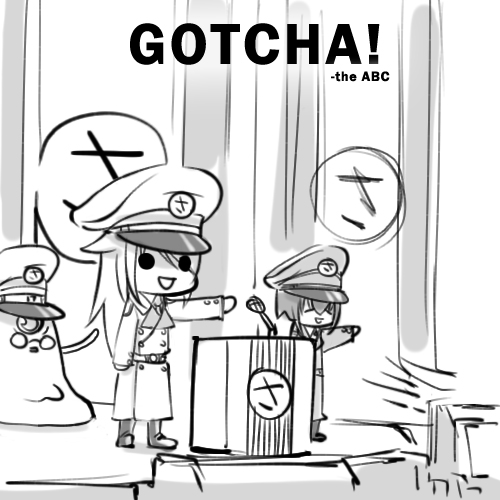 Before anything else, if you haven’t heard about it, there is an Anime Blog Awards going on now with Impz leading the way. Make sure to nominate and vote for your favourite anime blogs!

Not to mention my own gotcha post featuring lolcatz here.

And as far as I know, Josh and IcyStorm fell for it and made also posted about it here:

It was really fun, maybe we can come up with something even more grand next year, eh?