Posted by Neko Kyou in Reviews on August 4th, 2007

I expected Lucky Star to be a load of pure randomness, somewhat like Azumanga Daioh, and was pleased to find out I was right. Azumanga was ranked in my top 10 list of funniest anime, and of course I hoped that Lucky Star would be just as good, if not better.

First thing I noticed was how I find the opening song and sequence to be rather annoying. Not as much as Azumanga’s, but still annoying. However, that annoying op would soon be very catchy and I find myself listening to it over and over by the 3rd episode. Damn… 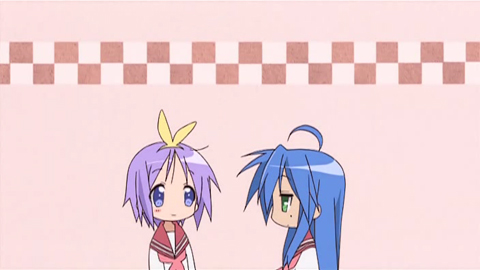 There’s plenty of food talk in the first episode. Plenty of it. It’s so random, yet unlike Azumanga, isn’t exactly pure nonsense. In fact, I begin to realize that that’s how we would usually end up talking about when a few friends get together for fun – random talks about anything and everything.

Going a little further, Konata is revealed to be an anime fan and a gamer, playing both consoles and MMORPGs. I’m not sure how true is this, but based on my own observation, majority of anime fans are also gamers, and many people I know are both fans of anime and MMOs (me included). If you’ve checked out my weekly review #6 here, you would have realized that I find many scenes, behaviors and responses in Lucky Star to be very familiar. It was at this point that I told myself, “Yes, I know I’m going to like Lucky Star…”

Lucky Star is definitely for fans of both anime and games, with many references and parodies, whether direct or indirect, to other popular titles such as Suzumiya Haruhi (both Suzumiya Haruhi and Konata are voiced by Hirano Aya), Full Metal Panic, Newtype magazine and games such as Street Fighter and MMOs. And how often do you have a teacher who plays the same MMO as you do and is even part of your party?

The episode is usually only about 20 minutes long, with the last 3-5 minutes showing the Lucky Channel show, some sort of an after-show for Lucky Star. The first time you watch this you would be greeted by a typical “I’m so cute” character who later on shows her true personality, which is anything but cute.

You will also never hear the same ending theme twice. For the first 12 episodes, the ending theme would be a random anime song being sung in Karaoke mode by one or more of the 4 main characters. Some of the more notable songs are Dragonball’s opening, Doraemon’s theme and Monkey Magic. 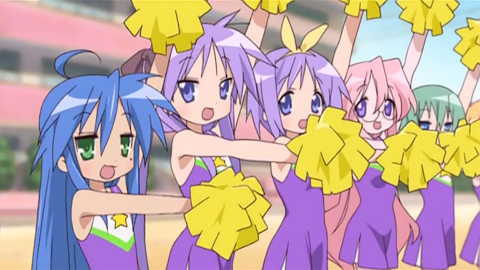 The four main cast are Konata, Kagami, Tsukasa and Miyuki. Konata is the main character of Lucky Star and the crazed anime/game fan who apparently picked up her habits from her father… who actually plays age-restricted dating sim games in front of his young daughter. Konata is portrayed as very “under-developed”, being short and … flat… and stuff…

Next we have the fraternal twins, Kagami and Tsukasa. Despite being twins, their personalities could not be any more different then they are right now. 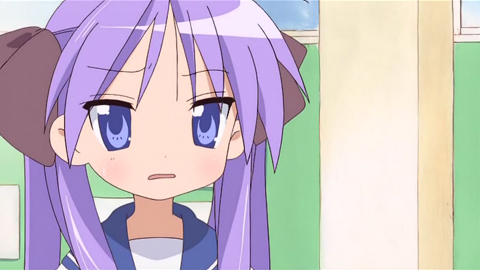 Kagami is your typical tsundere (check here if you don’t know what tsundere means) who also acts as the tsukkomi (a serious character). Kagami, also sometimes referred to as Kagamin, is very hardworking and usually excels in her academics. Even though she constantly complains about Konata, she does try to look out for her and even offered to help Konata with homework. She also likes to play games but is often frustrated because she could never win Konata. Kagami is my favourite character in Lucky Star so far 😀

Then we have her younger twin, Tsukasa, which is the complete opposite. Friendly, clumsy and lazy, she probably fits in better as Konata’s sister. Tsukasa is also very gullible and ends up as the joke on many occasions.

The last of the main 4 character is Miyuki. Miyuki is pretty, smart, good natured, friendly, thoughtful and very polite. She’s also clumsy, has terrible vision, bad at cooking, and many other weaknesses which Konata considers as “moe points”.

So far I have seen 2 major parodies of other anime being played out in Lucky Star. There are actually plenty of parodies, but these 2 are the ones that stood out the most for me: 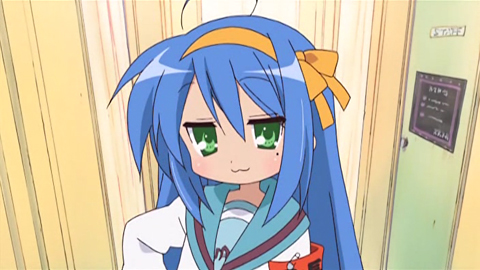 While there are plenty of Suzumiya Haruhi references throughout Lucky Star, there is one particular episode where Konata cosplays as Haruhi at work. This was especially interesting to watch since both Konata and Haruhi are voiced by the same seiyuu, Hirano Aya, and during that episode she kept switching her voice between Konata mode and Haruhi mode. They also got the same seiyuus for the entire Suzumiya Haruhi cosplay cast for that one episode. 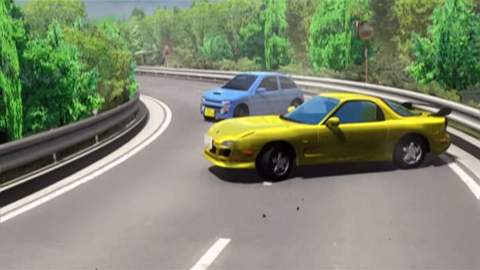 During one of the earlier episodes, there is a short scene that is a parody of Initial D. The cup of water, the track, the script and the character design of the spectators were similar to Initial D. The group that did some of the opening songs for Initial D, Noisy Tribe, also performed the background song that was being played during the scene.

I can only think of good things for Lucky Star and don’t see how anyone could not like it. You might not get addicted to it like I did, but I’m quite sure everyone would enjoy the style of randomness that somehow can relate to all of us.