My Chronicle: Journey Through Anime I

Posted by Neko Kyou in Personal on August 9th, 2007

I can’t really remember what was the first ever anime I’ve watched, but I do have vague recollections of some of the earliest anime I did pay attention to.

I didn’t know they were anime back then. Heck, I didn’t even know what anime was! To me, it was all cartoons and were no different from Scooby Doo, Ghostbusters and The Flinstones. But now, at least a decade later, after I’ve become an anime fan, I was shocked to find that many of my old favourites were really anime. 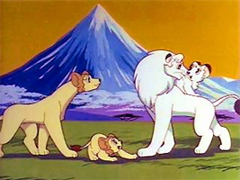 Kimba/Leo was created by Osamu Tezuka, the father of anime and manga. He was highly regarded as the Walt Disney of Japan. I vaguely recalled his first work, Astro Boy, which is said to be the first ever anime created, but I do not remember if I actually watched the series before. However, I was a big fan of Kimba/Leo, and I remember that it was one of my favourite shows on TV at that time.

Kimba the White Lion tells the story of a white lion cub, who escaped from a hunter on a ship. After managing to find land, Kimba was found and raised by humans. Kimba then returned to the jungle, carrying his father’s ideals, to provide all animals with a safe haven and to stand for peace.

Leo the Lion is the sequel to a now grown Kimba. However, the focus of the story no longer lies in Leo/Kimba, but in his cub, Rune. Unlike Kimba the White Lion, Leo the Lion was darker in nature and somewhat depressing. But still, I’m pretty sure I liked Leo more than Kimba at that time.

I also recalled being a big fan of Speed Racer. Again, I had no idea that this was anime as well. I just know it was a cartoon, and I liked it a lot. It was the first racing-themed show I watched… At least I think so.

Speed Racer’s car, the Mach Five, was the first ever car I fell in love with. Looking back now, I can’t believe I actually wanted the steering wheel on my car to look like that! But it looked cool to a … what… 5 year old? Well, somewhere around there anyway. Each button you press gives you a different function. That was probably the one and only reason why I liked Speed Racer.

The Lion Voltron, on the other hand, is still quite vivid in my mind. 5 robot lions that could combine into a huge kick-ass robot was awesome at the time. The best part of the show was always when Voltron pulls out his (notice I said his, that’s because Lion Voltron initially had an AI) sword and go for the win. Kind of reminds you of Power Rangers, doesn’t it?

The story is also pretty similar to Power Rangers. The Voltron Force was in charge of defending the planet Arus from an evil King, his son, and a witch. Only difference here is, they do not hide their identity and they are working directly under the Princess Allura.

There was one mech/robot that instantly reminded me of Voltron from a very popular anime a few years back. That was Super Vandread of the Vandread series. The way it pulled out its sword screamed Voltron all over. Possibly a tribute to Voltron, even having starting with the letter “V”.

Saber Rider and the Star Sheriffs 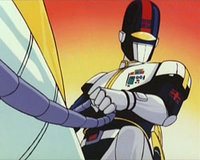 A group of 4 people, known as the Cavalry Command, were chosen to operate the Ramrod Equalizer Unit (Bismarck in the Japanese version) to protect the New Frontier from Outriders (Deathculas), a humanoid alien race that terrorizes the human colonies.

Saber Rider was cool. Ramrod was cool. How many robot/mech do you know that have a shitload of guns hidden in its chest? Wait… never mind, don’t answer that. There’s actually quite a few others. But it was the only one I knew at the time, so it was cool.

What’s interesting to note is that Saber Rider was the main character of the show only in the American version. The original Japanese series was called “Sei Jushi Bismarck”, and the main character was really Fireball (Shinji Hikari). That does somewhat makes sense, since I do remember Fireball having the most screen time while Saber Rider appears far less frequently.

And then it came. The one that changed my perspective… forever…

It is blue and round, and up until today I still wish for one. Make a guess 😛

8 Comments to “My Chronicle: Journey Through Anime I”