The Father of Manga and Anime – Osamu Tezuka

Posted by Neko Kyou in Legends on October 1st, 2007 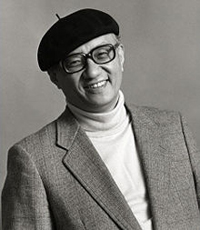 Everyone knows that manga and anime goes almost hand in hand together – like siblings. But how many actually knows the truth behind it? Modern day manga and anime are indeed siblings, more so than you might believe at first. They both have the same father, Dr. Osamu Tezuka.

He was born as the eldest son of 3 on November 3rd, 1928 in Osaka. He grew up in a family exposed to manga and animation, which explains his deep passion for the subjects.

Because of World War II, Osamu decided to get a medical degree. He managed to get his license, earning him the Doctor title, but never put it to practical use. Instead, he chose to follow his dreams to do manga instead after his mother encouraged him to do what he loves best. However, he did put his knowledge to use while he was working on what would be one of his most well known series up to this day – Black Jack.

Osamu is also known as Japan’s equivalent of Walt Disney. This comes as no surprise as he was a real big fan of Disney’s animation; watching Snow White 50 times and Bambi at least 80 times.

His style revolutionized the manga world and was the first to use the big eyes style in his drawing which we’ve all come to know and love. Thus, he became the Father of modern manga. According to himself –

“I felt [after the war] that existing comics were limitingÂ·. Most were drawnÂ·as if seated in an audience viewing from a stage, where the actors emerge from the wings and interact. This made it impossible to create dramatic or psychological effects, so I began to use cinematic techniquesÂ·. French and German movies that I had seen as a schoolboy became my model. I experimented with close-ups and different angles, and instead of using only one frame for an action scene or the climax (as was customary), I made a point of depicting a movement or facial expression with many frames, even many pagesÂ·. The result was a super-long comic that ran to 500, 600, even 1,000 pagesÂ·. I also believed that comics were capable of more than just making people laugh. So in my themes I incorporated tears, grief, anger, and hate, and I created stories where the ending was not always happy.”

The big eyes were actually an inspiration from the cute and innocent look in many of Disney’s animation. Osamu also found that with big eyes, it was easier to portray and exaggerate emotions.

It’s also interesting to note that while Osamu drew inspirations from Disney, it’s kind of ironic that many accused Disney’s Lion King of plagiarizing one of his earlier works, Jungle Emperor. While the similarities were quite noticeable, Tezuka Productions took it as a complement and did not pursue the matter.

He created more than 700 manga during his life, some of the more popular ones you might recognize such as Astro Boy, Jungle Emperor, Black Jack and Metropolis.

Osamu Tezuka gave birth to modern anime through Astro Boy, released in 1963. Not only was Astro Boy the first to show the anime-qualities we are spoiled with today, it was also the first animation utilizing Osamu’s new system of limited animation. In a nutshell, its basically reusing certain cells such as expressions and poses. The main idea was to cut cost and improve production time and was adopted as the industry standard in Japan even up to now. Although, anime fans nowadays can be pretty sensitive to studios who keeps reusing the same cells. I know I’m one of them.

There is a common theme in all of Osamu Tezuka’s work; the preciousness of life. He was greatly influenced by the war and wanted to portray to everyone that life is precious through his works. That was the reason why he had initially studied in the medical field to become a doctor, but realized that his true passion lies in drawing and that he could send his message out to a greater audience through them.

Jungle Emperor (Kimba/Leo) was possibly one of my first anime experience. I could also recognize Astro Boy easily since many of my older cousins were always reading and watching it at the time, although I never really bothered with it.

Besides Jungle Emperor, other Osamu Tezuka works I’ve read/watched are Black Jack and Metropolis (2001). Although I don’t really follow the entire series, I do watch it whenever I see an episode of Black Jack on Animax and whenever I do, I’m reminded of the man who brought us modern day manga and anime.

The Father of manga and anime passed away on February 8th, 1989, at the age of 60. Even though he was no longer there to watch over his “childrens”, both manga and anime had continue to grow and evolve thanks to his original revolution. I think he would have been proud.

4 Comments to “The Father of Manga and Anime – Osamu Tezuka”