Gundam 00 (or g00 as I affectionally call it) is already in its 6th episode. It’s definitely not Seed or Wing and it’s without a doubt serious business.

“We’re very serious. You should be, too.”

Gundam 00 has mysteriously got me hooked, having me wait anxiously every week for the latest episode. It has become one of my most anticipated weekly doses of fresh anime.

However, ask me why it’s good and you would see me pausing and hesitating for a while trying to think of an answer. Ask me what’s wrong, and be prepared to sit down with a cup of coffee or tea. It’s gonna be quite a lengthy ride.

Side characters have more depth compared to our “heroes”…

Gundam 00 has some prominent characters. Unfortunately, none of them are part of the Gundam Meisters. Sure the Meisters gets the most screen time and action. But other than Allelujah’s sudden madman outburst in episode 5 and Lockon’s conversation with his best robo-buddy Haro, there just isn’t any attraction to the Meister’s characters.

On the other hand, side characters are leaving a deeper impression. Graham Acre is possibly the most well built character so far and is much cooler than any of the Meisters. What’s even more worrying is that a new character that has just been introduced and has about 5 minutes of screen time is already becoming THE coolest cast of all – Ali Al-Serges.

In his on-screen debut mobile suit battle, he’s already pwning the great Exia who had just been upgraded with new equipments. If Setsuna can defeat an entire army on his own, and he’s getting his ass whipped by Ali, think of what Ali could do! Then again, it could just mean that Exia is an awesome suit and Setsuna just plain sucks. Either way works for Ali and against the Meister’s reputation.

Let’s not forget Sergei as well. He appears to be the most reasonable person in the entire Gundam 00 cast. If only he didn’t have to pilot that ugly mobile suit. It makes Zaku looks like a beauty contest winner.

Setsuna F. Seiei. First time I’ve heard a Japanese with a middle name and actually introduces himself as such. Okay, so that could happen. But it still feels weird. And let’s not even get into Saji and Kinue Crossroads (unless their father is a western).

Allelujah Haptism. Haptism? Baptism? I wonder if Sunrise took the idea from the PC game, Worms. If you’ve played the game you will definitely know of the Holy Grenade. You know, the one that goes “allelujah~” before it decimates your opponents (or yourself, as the case may be). Seeing how Allelujah did explode and went mad in episode 5, that might really be the case. Seriously… Allelujah?

Lockon Stratos. A sniper. “Locked-on stratosphere”? When Setsuna shouted for Lockon to fire in the first episode, I didnt’ even realize he was calling his name. I wonder if Celestial Being gave him the sniper Gundam, Dynames, because of his name. It’s just too twisted.

Tieria Erde. Sounds like a female name. Tieria looks like a female. Until he opens his mouth and reveals the shocking truth. “She” is a “he”. Up until the final moment in the final moment in the first episode, I’ve thought Tieria was a girl (even though I should have known when Virtue made its debut, but still the realization never hit me until Tieria was out of the suit).

Return of the NewTypes

Allelujah and Soma obviously shares some kind of connection resembling the NewType ability to sense each other’s presence. But that’s not where it ends, the ability gets an upgrade now that both people could enter each other’s mind and communicate directly via telepathy.

Especially when he steps into his Flag…

He’s so passionately obsessed with Exia that the only explanation I can think of is that he’s gaying with the Gundam. He might have a thing for younger guys too, since he could so easily “sense” that Exia’s pilot is young. It just feels gay. But Graham is still cool. 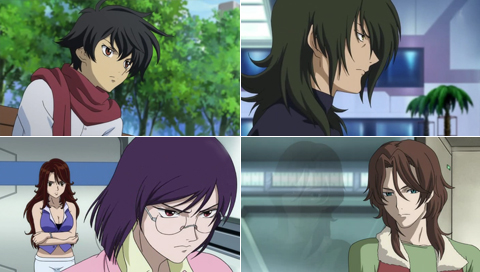 Picture worth a thousand words?

Have you ever seen a grouchier bunch of Gundam pilots? Okay, to be fair, Lockon isn’t that emo. He’s quite lively actually compared to the rest.

I find Gundam 00 sucks, yes. However, I’m definitely growing to like it as well. As I did this rant I came to realize some of the reasons why Gundam 00 has increasingly grab my interest with each passing episode. But that is a story for another day…