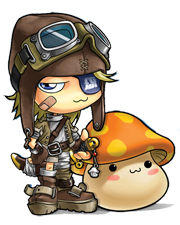 I totally never saw this coming. Never would I have expected that MapleStory would become an anime.

For those who don’t know what it is, MapleStory is a 2D side-scrolling Massive Multiplayer Online Role Playing Game (MMORPG) developed by a Korean company called Wizet. It’s pretty popular especially in South East Asia.

Personally I’ve never played MapleStory before, probably because I was a Ragnarok Online player at the time. The gameplay somehow didn’t appeal to me, although I know many RO players eventually migrated over to either MapleStory or Gunbound due to the negligence of the region’s poorly maintained RO server. As far as I know, MapleSEA (MapleStory in South East Asia) had great server maintenance and is still very popular right now.

I guess I really shouldn’t have been so surprised that it would be turned into an anime. After all, Ragnarok Online did have one, although the real RO anime that everyone had been anticipating never made it for release.

While I’m not a MapleStory player, this is definitely something I’ll be looking into when it begins to air on October 7 by TV Tokyo. The series will be on every Sunday, 8.30 am in Japan. MapleStory the anime will be animated by Madhouse Studios.